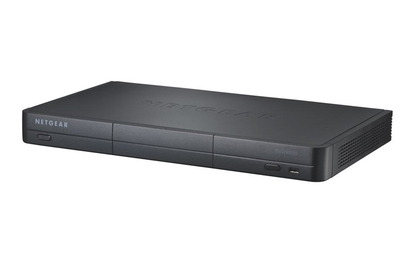 The Netgear Digital Entertainer Elite is a must-buy for technology-shy HDTV owners. Even without a HDTV, it remains one of the most user-friendly and versatile media players we've ever had the pleasure of testing.

Netgear's Digital Entertainer Elite EVA9150 is the most versatile example of a rare breed: set-top media players that can be used by "the rest of us." With their terminal-like interfaces that only a geek could love, most such boxes tend to appeal mainly to the file-sharing/hacking crowd, but the $602 Elite makes it painless to connect your TV to your PC or Mac, and to the Internet at large.

Without reading the manual, or even looking at the foldout quick-setup sheet, we were quickly watching videos streamed from our PC and YouTube. You simply connect the box to your TV via a cable -- HDMI, component, or composite -- then run through a quick on-screen setup procedure using the included remote control.

After going through these basic setup screens, the TV tells you to go to your PC or Mac and install the software from the CD. (An advanced install mode for using a Netgear ReadyNAS or other network storage drive is included, but we did not test this.) It takes a few minutes to install the software, which first finds all media files on your disk, then asks which folders you want to share with the Entertainer Elite (we chose our Videos, Music, and Pictures folders).

At that point, the Entertainer and the PC connect with each other -- the TV screen tells you that setup was successful and directs you straight to the main navigation screen, where you can start streaming. I clicked TV/Video, and my PC-based videos were immediately available and playable, less than 15 minutes after opening the box.

PC videos played promptly and smoothly with hardly any lag, using either Ethernet or a strong (same-room) 802.11n connection. Netgear warns that 802.11g will not be good enough for glitch-free HD streaming, and they were right.

I tried Ethernet, HomePlug AV, and Wi-Fi g and n connections. Ethernet and HomePlug AV gave perfect results when streaming HD from my PC, as did 5GHz 802.11n with a strong connection. At longer range, even 802.11n proved susceptible to dropouts, and 802.11g was unwatchable.

Internet video is a little less satisfying, since YouTube and other videos take a few seconds to start playing, but playback is still light-years ahead of Netgear's previous Entertainer, thanks to the built-in 500GB hard drive that allows buffering. Once buffered, playback was generally smooth and glitch-free.

Even better, watching Web content does not depend on a PC, since the Entertainer can connect directly to the Internet. Out of the box, the Entertainer Elite supports playback of YouTube, Internet radio, RSS feeds, podcasts, and Flickr photos.

YouTube videos looked good, but they are confined to a box in the corner of the screen unless you choose full-screen mode. Video in that mode is very pixelated, but that's to be expected on a 50-inch HD screen. YouTube options like captions are not supported.

The Netgear also has a BitTorrent client for downloading files directly to the hard drive, a feature that will appeal to the movie-downloading crowd.

Still, the Entertainer Elite's real strength is its kitchen-sink video playback ability. It can handle virtually any video format, whether downloaded or from your camcorder, including MPEG (-1, -2, or -4), Xvid, H.264, VC1/WMV, AVI, MKV, VOB, MOV, DivX, ISO, and more.

You also have the option to view your PC screen on your TV, which can be handy for Web surfing in the living room, but don't expect to watch videos: The screen seems to refresh only a few times per second or even less often, making Web video unviewable. The other problem with controlling your PC in this mode is the on-screen keyboard, which takes forever to enter a search term or URL.

Aside from the lack of a keyboard (the alpha mode on the number pad is unusable since you can't even see the minuscule faint letters), the remote control is very good. I had to get accustomed to the somewhat nonstandard use of menu and back buttons, but the layout otherwise was familiar and usable even in a darkened room.