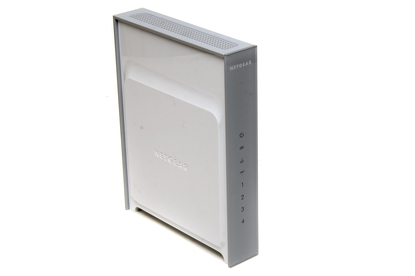 Netgear’s DG834N provides good value in terms of router and modem capability and security features. We were very impressed with its modem sync speeds, but no Gigabit Ethernet and poor throughput speeds make this a poor router for heavy data transfer and media streaming needs.

Netgear's DG834N is a combined 802.11n draft wireless router and DSL modem built with simplicity in mind. Its modem is superb, managing to sync at some of the fastest speeds we've seen for a DSL modem. However, no Gigabit Ethernet and poor throughput speeds may make this unattractive for people who need to conduct heavy data transfers and media streaming on their local network.

Netgear has packed in a number of features to maximise the DG834N's value. Along with an ADSL2+ modem, this unit also packs a four-port router and 802.11n draft 2.0 Wi-Fi for theoretical throughput speeds of 270Mbps. Our biggest disappointment with this device is ultimately its Ethernet ports. Although four is sufficient for most uses, they are limited to a 100Mbps connection speed — a far cry from today's Gigabit standard. It is odd to find a router that has faster wireless than wired connectivity; the ports' speed impacts on data transfer speeds and media streaming.

The router is slightly larger than most, but its vertical design makes it easy to hide or stick into cramped spaces. The unit has the same two-tone gloss white and grey colour scheme common in most of Netgear's low- to mid-range routers and modems; it's an attractive design that doesn't draw attention to itself.

Setup is largely automated. Users have the choice of either a setup CD or the router's web server for configuration; both provide a quick installation that configures the router with presets fit for most users. Establishing an Internet connection is extremely simple — the router automatically configured its DSL settings and simply required us to input our DSL account details. Configuration options can be easily accessed from a simply laid-out Web page.

We were disappointed to find that the router has no built-in Quality of Service (QoS) feature, but its wireless and security features are implemented well. Users are unable to change between 20MHz and 40MHz modes, and there are only seven radio channels to choose from, as opposed to a usual 13. Still, the option of two N-only modes — 130Mbps and 270Mbps — makes it easy to work with draft 1.0 or draft 2.0 802.11n adapters. Wireless security standards include WEP, WPA-PSK and WPA2-PSK encryption, with the option of both TKIP and AES passphrases. The DG834N also has a configurable firewall, allowing for customised rules as well as domain and keyword blocking. Basic denial of service (DoS) attacks can be repelled at a hardware level.

We were extremely impressed with the DG834N's modem capabilities. It managed to sync to our DSL exchange at 24Mbps downstream — the fastest we've seen — and 1Mbps upstream. An international broadband speed test confirmed these speeds, but we did some real world testing to make sure. International traffic managed an average speed of 2.3MBps, a fairly fast result given that theoretical 24Mbps speeds should translate to 3MBps. Our proximity to the DSL exchange helped these results somewhat, but they still attest to the DG834N's modem capabilities.

Unfortunately, local throughput speeds are its weakest feature. We transferred several large files from a computer connected at 100Mbps to an 802.11n capable laptop at both 130Mbps and 270Mbps to test the router's data transfer capability. At close range, speeds averaged 4.3MBps and peaked at 4.46MBps. However, at 15m with two brick walls as obstacles, speeds dropped dramatically to 1.6MBps. These speeds pale in comparison to the much cheaper TP-Link TL-WR841ND, which, although it is only a router, seems to have much better throughput capability. Close range transfer speeds won't affect Internet speed but at 15m, the decrease in throughput will likely impinge on Internet traffic at least a little.