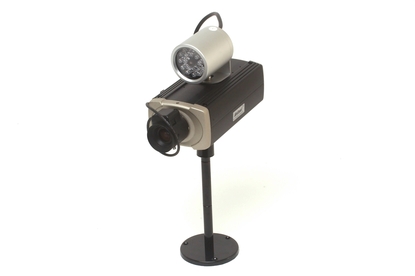 There’s not much point buying an infrared camera when the infrared function barely works.

This rather frightening looking device is one for all you James Bond wannabes out there. Although it may look like something 007 would whip out of his back pocket to dispense with a gang of bad guys, the Netcomm Infrared IP Camera isn't actually a lethal weapon. Even more disappointingly, it's about as useful as a chocolate teapot. Designed to take surveillance footage both during the day and at night, the camera suffers from several flaws that render its infrared capabilities almost entirely defunct.

On paper, the NS4140 seems well equipped. Using a special day/night CCD, the camera provides a resolution of 704x756 at a maximum frame rate of 25 fps. During daylight hours the camera's performance isn't bad, with crisp imaging and an effective auto focus function. The colour is slightly washed out, but for a surveillance camera this is hardly a significant matter.

The main drawback of the NS4140 is using it after dark. Though it is quoted as having a 10m maximum range, we found the infrared illuminator to be woefully underpowered. When using the camera in the dark the image appears unacceptably grainy and dim. Even when using the camera at shorter distances we ran into problems. Due to the transmitter's cylindrical design the infrared field only provides coverage for a circular area in the centre of the screen. This leaves up to half the image in relative darkness. As a consequence of the low lighting, the lens struggles to correctly focus leaving images almost entirely indecipherable.

Disappointingly, the problems don't end there. Netcomm has provided the singularly most unhelpful installation procedure conceivable. Far too much of the configuration is unnecessarily placed in the hands of the user, both when installing the device and when using it. For starters, Netcomm have opted to use a generic instruction manual with a few paltry addendums rather than including a dedicated set of instructions, and for a high end product this is simply unacceptable.

Secondly, those of you who are non-technically minded are likely to find entering IP addresses and other details confusing. When it comes to programming the camera's security monitoring features there is little improvement. Whilst most of the features we would expect to see are catered for, such as motion detection and email forwarding, their setup is hidden away beneath complicated menus and scripting interfaces. A much friendlier interface could easily have been achieved if competitor's products are anything to go by.

If you really are desperate for an infrared camera, don't need to use it over a wide area or long distances, are willing to spend a fair bit of time setting it up and don't mind paying a lot of money for it, then perhaps the NS4140 would be useful. For everyone else, we'd advise you not to bother.