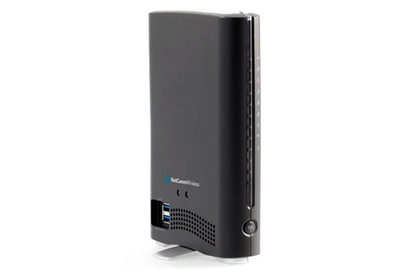 It may look small and sluggish, but the Netcomm N900 produced respectable performance scores in our tests and, most importantly, it was reliable. However, it is fairly pricey.

Netcomm's N900 NF2 is a versatile little networking device that is suitable for home and home-office use. It features 802.11n simultaneous dual-band Wi-Fi, Gigabit Ethernet, and it even allows for a 3G or 4G dongle to be used as a back-up Internet connection. It's also a router that's capable of handling a fibre connection, so you could say it is somewhat future-proof when it comes to Internet connectivity.

Physically, the Netcomm NF2 doesn't look like much. It stands upright on a desk, has a protruding, single antenna at the back, and it's not a very big unit. In fact, if its blue LEDs weren't so bright and if it didn't have an external antenna, we would call it discreet. The LEDs can thankfully be dimmed a little through the configuration page, but you can't get rid of the antenna. The rear features a 4-port Gigabit Ethernet hub, with one of those ports being a Gigabit WAN port that can be used to distribute an Internet connection from an ADSL2+ or cable modem, or from a fibre installation.

Because one of the Gigabit ports is also the WAN port, that leaves only three other Gigabit ports for wired connections, which can be inconvenient if you want to plug in more than a couple of PCs and a NAS device, for example. The side of the NF2 router features two USB 2.0 ports, one of which can be used to plug in a mobile broadband modem (3G or 4G), while the other can be used to distribute files off a USB storage device across the local area network.

Setting up this router was no big deal. We plugged in a Billion ADSL2+ modem to distribute our iiNet Internet connection, and we logged in to its Web interface to enter our credentials. The IP address for this router is a hard one to guess — 192.168.20.1 — but it's printed in the quick-start guide that ships with the router so you don't have to go hunting for it in the network settings after you plug it in. Conveniently, the router comes with pre-secured 2.4GHz and 5GHz networks, and their credentials are printed on a little card that ships with the router. This means you can set up the router easily from a laptop or other mobile device.

As for the router's Web interface, there are two parts to it: the basic interface, which shows all the at-a-glance connection information, and the advanced interface, which contains the router's other customisable features. The basic screen has a black background with vertical tabs that allow you to go into the Wi-Fi, mobile broadband and fixed-line broadband portions of the interface quickly, while the advanced screen has a white background with labels across the top and more of a table layout. You'll need to go in to the advanced screen if you want to implement Internet filters, port forwarding, or to play with other things such QoS or the USB storage settings.

Conveniently, the router does have a wizard, which can guide you through the Internet connection process; you'll have to select your connection type, such as 'PPP over Ethernet' for ADSL2+. It can guide you through the optional 3G/4G connection process, which can be used as a backup in case your main connection goes down, and after that it takes you to the Wi-Fi settings and also asks you if you would like to change the default password of the router. It's definitely not the easiest or flashiest-looking setup wizard we've seen, but we think anyone who isn't experienced with networking, but who still has an idea of what to do, should get through it without any hair-pulling.

In addition to testing the NF2 with our iiNet ADSL2+ connection, we also made use of its 3G capability by plugging in an Optus 3G USB dongle that featured an iiNet SIM card. It worked flawlessly. To set it up, we had to select our country, network provider (from a dropdown list) and enter the APN that we normally use for accessing the Internet. We were able to set it up so that it would default to the 3G connection when the main ADSL2+ connection was not available (we did this by enabling the automatic 3G backup from the main WAN setup page), and it switched over without any problems when we unplugged our ADSL2+ modem from the router. We preferred to leave the failover disabled so that we would have to switch over to 3G manually in the event that the ADSL2+ went down, but we can see where the failover would be convenient when running a home office, for example.

Another aspect of the Netcomm that worked well for us was its wireless networking. This surprised us because the unit does look like a slowcoach, mainly due to its old-fashioned external antenna. It's a router that supports both 2.4GHz and 5GHz 802.11n networks simultaneously, and its 5GHz performance was especially impressive. In our close-range test (2m away from the router — otherwise known as our best-case scenario test), it recorded a transfer rate of 18.86 megabytes per second (MBps), which is over 10MBps faster than what its 2.4GHz network did at the same distance. In our mid-range test (10m away from the router), the 5GHz performance dropped off as expected, but it was still a worthwhile 8.97MBps. At this distance, the 2.4GHz network kept pace nicely with the 5GHz network, with the 2.4GHz network recording an only slightly slower 8.34MBps. The Netcomm's 802.11n, 5GHz performance actually turned out to be faster than what we obtained from the Linksys EA6500 in the same short and mid-range tests and using the same platform and environment.

For wirelessly moving files between computers at short-to-medium distances, the Netcomm NF2 will perform well. It will drop speed when you start approaching distances of 10m or more, but even at these distances, things like streaming video files to a Smart TV or other networked devices will be fine. We had no problems getting videos to stream from a PC in one room to a TV 10m away in another room. High-definition files and standard-definition files streamed equally well. Of course, how well the wireless networks perform in your own home will depend on the presence of interference from other nearby routers, appliances and hindrances such as walls, floors and windows.

You can plug in a hard drive with data on it and easily share it across your network. It will appear immediately as a NAS device through Windows and, furthermore, because the router supports DLNA, you will very easily be able to stream video and music to Smart TVs and other devices that also support DLNA. We found it to be very easy to use in this respect and had no problems at all navigating the files on our plugged in drive through our Smart TV. An attached hard drive can also be accessed remotely if the FTP function in the router is enabled, but you'll have to know your router's external IP address or set up a dynamic DNS service to access it over the Internet.

Other features of the Netcomm N900 NF2 include QoS, a built-in firewall and URL filtering. It doesn't have a lot of frills, and, in fact, is missing features such as automatic firmware updates. It could use some better documentation, and we do wish it had an extra Gigabit port. Nevertheless, these are minor annoyances and we think the N900 NF2 is a good router for a small home or unit. We used it for an extended period of time and found it to be a reliable worker. It made easy work of multitasking — we didn't have any issues when distributing the Web to numerous computers and mobile devices, while at the same time streaming video to a TV using the router's NAS function, while at the same downloading torrent files on our main PC in the background. It handed heavy loads well.