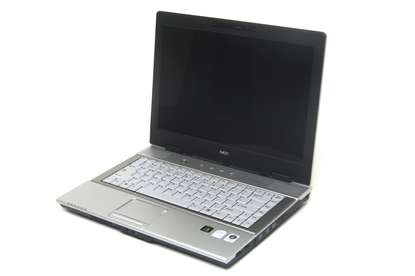 The E6310's improvements over the last iteration are grand, and it's quite competitive among other notebooks at this price range, too. If you're after a machine capable of dealing with both aspects of your daily life then look no further.

At a glance the 14.1in NEC Versa E6310 (2204DR) holds some nostalgic elements of its predecessor, the NEC Versa E6210. However, a closer look reveals a far more stylish and more feature driven unit. Although it still has its weaknesses, the Versa E6310 is a more competitive performer and a few simple touches have made this a very pleasant notebook to use.

The sleek silver chassis and leather-clad lid has been styled somewhere between Dell's XPS M1330 and the older NEC Versa E6210, which looks good. The speakers have been given an overhaul, a dual-function touchpad has been included and a set of handy shortcuts have been mounted above the keyboard, not to mention the HDMI port, a feature that's growing in popularity. There's even 1GB of Intel Turbo Memory for added performance.

NEC has installed Windows Vista Business, and there is certainly a business aspect to this notebook, but its versatile design would suit the casual home user as well. For instance, video conferencing is made easier with a Skype shortcut and a webcam, but this could easily be used for personal calls, and is especially handy for those who are regularly on the road.

The dual-function touchpad says it all, providing touch sensative media controls like play/pause, skip track and volume control, as well as shortcuts to Microsoft Office applications and the Windows search function.

An Intel Core 2 Duo T7500 2.2GHz CPU with an 800MHz front side bus and a 4MB L2 cache gives this unit enough power to handle the usual set of applications, plus some of the more taxing programs available, like Adobe Photoshop. This CPU is part of Intel's latest Centrino Platform, which also supports Intel Turbo Memory, a type of Flash memory that is used to boost the speed of the system.

Turbo Memory can cache regularly used data via the high speed PCI Express bus and use it to speed up the performance, or even decrease the time necessary to wake the system from sleep mode. It's difficult to gauge just how much performance increase is provided, but the NEC scored well in our benchmarks regardless.

As well as Turbo Memory, the NEC Versa E6310 also includes 2GB or DDR2 RAM like any other notebook would. An NVIDIA 8600M GS has been installed, giving this machine some power to decode video, speed up 2D image display, or even play some games.

In WorldBench 6 it managed to get an 81, a very good score. In our iTunes test, encoding 53 minutes worth of WAV files to 192Kbps MP3 files took just 82 seconds, and the same test in Cdex took 119 seconds. In our DVD rundown test the Versa E6310 lasted 92 minutes, about the standard for this type of notebook.

Also featured on this unit is an Eco button, which basically toggles the power settings between the three default Windows options; High Power, Balanced and Power Saver. The button itself has an LED that changes colour to indicate the setting; Power Saver is green, naturally. Next to this are two shortcuts, one for e-mail and an info "[i]" button linked to an NEC help site.

Probably the only sore feature of the Versa E6310 is its screen, which offers a resolution of 1280x800, but has a fairly poor viewing angle. Still, brightness and contrast levels are good.