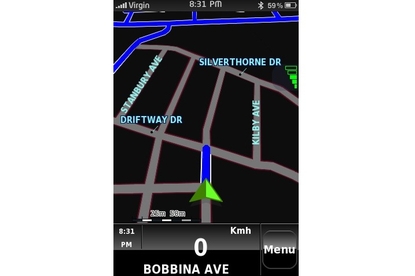 Though many of its limitations can and will be corrected by future software updates, as it stands the NDrive Australia GPS iPhone app is clearly lagging behind the competition.

The fifth Australian turn-by-turn GPS application to be available from Apple's App Store, NDrive Australia aims to please iPhone users with detailed maps and a straightforward user interface. Unfortunately, its lack of features and a sub-par interface means it fails to impress.

NDrive Australia competes with four other GPS navigation apps for the iPhone: Sygic, Navigon, TomTom and CoPilot Live. As soon as you load the nDrive Australia app, it's clear that graphically it is a step below the competition. Though you can use a standard iPhone swipe gesture in the main menu, the icons and text don't look as slick as the alternatives, particularly TomTom's excellent UI and CoPilot Live's minimalist and clean interface.

NDrive Australia's main menu features four key options: navigate, find, My NDrive and settings. Tapping the first box allows you to immediately navigate to an address, your home or favourite location, a recent location, a POI (point of interest), a postcode or a specific GPS coordinate. Entering an address is a three-step process: searching for the town, street and then house number, though you can also select a crossing or intersection. NDrive allows you to select QWERTY or ABC keyboard layouts, though the keyboard is slightly different to the iPhone's standard one. It’s a little larger, but the positioning of the space bar to the left takes some getting used to.

NDrive Australia's settings are grouped under various categories including general, language, map appearance and routing options. Tapping general reveals the settings for all of these categories and not just the general menu — once you've tapped a setting, you can’t go back to the regular list layout, meaning this menu requires extra scrolling.

Scrolling isn't smooth either — if you flick your finger too quickly the list will suddenly jerk and stop. The also happens on the map screen: you can pinch to zoom in and out on the maps, but the process isn't smooth as it should be.

NDrive Australia's map screen is clear and pretty straightforward. It lacks the visual appeal of other apps, and the POI icons are hard to see, but street names are very clear, arrows are well positioned and it's easy to see your planned route on the map. By default the information bar at the bottom of the screen shows the current road you're travelling on, while the next road is displayed at the top of the map screen. Speed, ETA, the current time and distance to the next turn are also displayed, as is a large next turn icon. You can't edit or change any of the information shown in the bar.

Voice guidance on NDrive Australia is below average, even for an iPhone app. There is no text-to-speech and the sound is difficult to hear even at maximum volume. GPS performance is also erratic: when using a vent mount, the location indicator on the map lagged behind our real position. This was largely solved by using a window mount, but GPS lag still occurred at various points during testing.

NDrive also lacks a number of other features. You can't change the warning sounds, the app can't warn when you are near a POI (nor can you edit POIs) and there are no school zone warnings. NDrive also lacks the ability to navigate to an iPhone contact — a feature standard on the other iPhone GPS applications — and doesn’t have lane guidance. On a positive note, you can set a speed limit alarm, switch on 3D landmarks, and be alerted of current speed limits. There are also speed and red light camera warnings and the ability to create, edit and organise favourite locations. Three favourite groups come pre-loaded (personal, friends and work) but you can delete the standard groups and create as many of your own groups as you like.

In addition to car navigation, NDrive Australia for iPhone also has pedestrian and adventure modes. The latter provides a number navigation options aside from regular roads including walking, four wheel drive tracks and boat navigation.