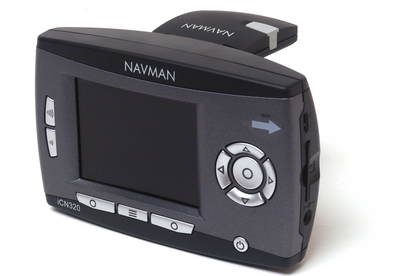 The iCN 320 is a low cost GPS unit equipped with a basic features set and designed for use straight out of the box. This will appeal to new buyers who are put off by the high price of in car navigation, but those wanting more advanced options would be advised to look elsewhere.

GPS units are currently perceived as expensive luxury items well out of the reach of ordinary consumers, but Navman are aiming to change that with the release of their strictly no-frills iCN 320 navigation system. Hoping to attract first time buyers, the company has priced this unit at around half the retail value of the more expensive GPS devices, such as the Tom Tom Go 500. But while consumers may be paying a good deal less for the iCN 320, they will also receive a lot less in the way of advanced functionality.

The iCN 320 is a small concave shaped unit with a fold out antenna that flips out at the rear when the GPS is in use. This is definitely smaller than most of the other in-car navigation units we have reviewed, but perhaps not as portable as Navman would have you believe, although it can be squeezed into a rather large pocket The unit is light, but with a solid feel and comes in a stylish looking black and dark grey finish.

Due to its size, Navman has fitted the iCN 320 with only a small 2.8" TFT screen - perhaps the smallest display we have used to date. At first, we were a little dubious when confronted with this screen, but ideally interaction with the screen when driving should be minimal at best. As the audio instructions are so clear on this unit, this wasn't as much of a problem as we first thought. There are times when a larger screen would have been useful, especially when trying to find a location or street on the map as no zoom options are supported. The mapping on this unit is rather basic; it doesn't scroll as you drive as on the more expensive systems, no day or night modes are available and only 2D viewing is possible.

However our biggest issue with the screen was not its quality (it performed well in sunlight), but rather the absence of a touchscreen. All interactions with unit are via the buttons below the screen or the navigation pad to the right, and at times this can be tedious.

Navman has tried to get around the disadvantages of having a smaller display by making clever use of the space provided. The display itself is split, with a small map displayed on the right while turn instructions are prominently displayed on the left. The next street to turn into is displayed in large font at the top of the screen, while the next turn direction arrow can be viewed on the top left. The distance to the next turn is also displayed, as is the next turn instruction. Under the map, the display can be toggled to show information such as speed, time or ETA. Alternatively, you can do away with the map altogether and simply view an instruction list of turns.

We think the most innovative addition to the map display was the inclusion of a large 'Progress Bar' bordering the map. This bar is empty when you first turn onto a street and fills as you drive along the street on the current instruction. When the bar is full, it means you are close to the next turn and the bar empties out when you take it. This feature is especially useful if you want to have a quick glance at the map to see when the next turn is approaching.

The audio instructions on the iCN 320 are easy to understand and loud, even though the speaker is placed at the back of the unit. Voice instructions are provided before each turn such as "In 400 metres, turn left" with a further warning issued as the turn approaches. In our driving, the unit quickly recalculated a new route when we got off track.

By pressing the menu button, users can choose to navigate to an Address, Point of Interest, Favorite Location or preset Home address. Entering a street name or suburb involves using the key pad to manually select letters and it is here especially that we longed for a touchscreen. Once a street name or suburb is selected, you can select a street number or navigate to the centre of the street or suburb if you are unsure of the exact location. Even though the iCN 320 has a slower processor than other Navman models, we have no complaints about either the speed or performance of this unit.

To price this unit so low, Navman has cut out advanced features and options. Still, most of the basics are provided such as avoiding tolls or being prompted if they are included. The voice tone can be changed to either male or female and multiple languages are provided, so the unit can be used overseas. A route demonstration mode is also included which allows you to preview a route before you drive it. What you wont find on the iCN 320 are advanced routing options, safety options, the ability to avoid certain areas or adding to POIs.

While an internal battery is included in the iCN 320, the only way you can charge this device is using a car charger, as Navman has neglected to include an AC adapter in the package. So if you are in the house planning a route and the battery runs out, you will have to go out to the car to charge it. We think this is an unnecessary hassle and Navman should really have included an AC adapter, especially as they market this device heavily as portable. In our tests, battery life on this unit was between 3 to 4 hours.

Continuing with the theme of simplicity, all map updates are provided on memory cards and there is no need to hook up the iCN 320 to a PC. In fact, no USB interface is provided at all. Navman estimate map updates to cost between $130 - $150 and use Sensis WhereIs map data.