If you're a fan of polygonal pugilism, the PSP is probably not your favorite system, thanks in no small part to its dearth of quality fighting titles 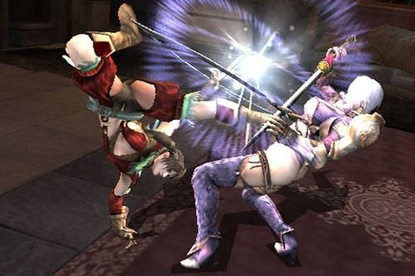 Soulcalibur: Broken Destiny is one of the PSP's best fighting games.

However, the portable console with the big screen (and big heart), means to change that by bringing one of Namco's most popular fighters to its sleek and slender self. Yes, Soulcalibur returns, and this time it has left the Jedi and ex-Jedi at home in favour of one God of War and a more ample character creation mode.

As any Soulcalibur enthusiast can tell you, the series has always set itself apart through its weapon-based gameplay and gorgeous visuals. And while nobody doubted that the portable version would include said weaponry, some did question whether Sony's handheld had the ability to do the series justice in the graphics department. Fortunately, the game delivers on the visual pedigree previously established, and at the expense of sounding shallow, the incredible graphics almost single-handedly make this a PSP classic. In fact, Broken Destiny raises the visual-bar so high that PSP owners should no longer be complacent with those muddy aesthetics that have plagued the system for too long. The characters look great and move smoothly, a tribute to the animation and frame rate. The backgrounds are detailed and rich, and show off a number of impressive lighting effects. And the overall visual variation - from the characters (all 30) to the levels - will impress everyone.

With such amazing aesthetics one would expect some other technical areas to take a few hits, notably the load-times and the sound. Yet neither is diminished, with load-times being fairly short and easily endured, and with a dramatic score that is well done and fitting.

On the Road Again

Unfortunately, the game does fall on its sword in one respect. With the player-vs-player fighting being restricted to an ad-hoc internet connection, one would expect a more robust single-player campaign, and regrettably Broken Destiny does not deliver. While there is a mode for quick one-on-one fights with the computer, the combatants are all randomly-generated, generic fighters created by the game, and they don't offer the intrigue of the game's classic fighters. This leaves the campaign (aka The Gauntlet), which ultimately turns out to be a boring and lengthy tutorial that offers limited help and whose story is pretty inane.

Yet that shouldn't deter fighting fans from experiencing one of the PSP's best fighters, which looks even better than Ivy after a battle with a clothes-remover. I'm kidding... it doesn't look that good.