Clash of the Titans

Game Republic has taken an admirable, but ultimately unsatisfying design approach by not ripping off Sony Santa Monica's Ghost of Sparta-starring series 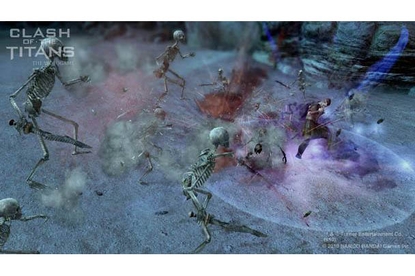 The official video game adaptation of Clash of the Titans is ultimately just as forgettable as its silver-screen inspiration, with what could have been a solid God of War clone ending up as little more than yet another disappointing hack-n-slash movie tie-in.

Months after slaying the Kraken on the silver screen, Perseus finally lands on consoles to hack harpies and slash scorpions in Clash of the Titans' game adaptation. Despite being yet another film-tied title, I had high hopes for this very videogame-y property. After all, I sat through the recently rebooted film thinking it'd actually be served better by an Xbox than the box office. Hell, the original film was, for all intents and purposes, God of War long before Kratos was even a stain in Zeus' robe. So why did this one leave me as stone-faced as Medusa's enemies?

For starters, developer Game Republic took an admirable, but ultimately unsatisfying design approach by not ripping off Sony Santa Monica's Ghost of Sparta-starring series. Instead of giving us a God of War clone in Clash of the Titans clothing, they implemented some interesting combat ideas that, if executed better, might have allowed Perseus to stand outside Kratos's shadow. For example, in addition to supporting the expected heavy, light, and combo attacks, combat incorporates a promising weapon-stealing mechanic. As you slice and dice through mythical beasties, they succumb to various stages of defeat, allowing specific actions to be taken against them; at their weakest you can trigger a brief quick-time event to disarm them, or act even sooner to steal their weapon-powering souls.

It's a good idea that unfortunately lacks refinement and polish. For one, there are too many weapons up for grabs; up to 80 death-dealers can be acquired, but many are useless, boring, or just feel too similar to other blades or clubs already added to your arsenal. Additionally, the mindless, repetitive button-mashing required to obtain the proper souls to fuel each armament grows tedious fast. Having to access a fun-stalling menu to equip them doesn't help either. If they'd used this system, but refined its mechanics and stuck to a dozen or so upgradeable ass-kickers, the combat probably would have been more rewarding -- novel even. But as is, battling with this half-baked system becomes boring less than half-way through Perseus's quest. It does pick up a bit towards the game's final third, once you've properly pimped out your best beast-slayers. Sadly, however, both your brain and thumbs will be too numb too care by the time you reach that point.

Which brings me to another of Clash of the Titans' flaws: It's just too damn long. It clocks in at close to 15 hours -- excessive for even a very good game in this genre -- subjecting you to endless hordes of blade fodder, backtracking, and poorly acted and animated cutscenes. Add to this dated audio and visuals, barely registering a notch above PS2 era, and you're left with another film-to-game adaptation destined to line the bottoms of bargain bins. It's a shame, too, because had it hemmed in the play time and polished the combat, it could have provided a lean and mean eight hours of satisfying God of War-like, gore-fueled fun.