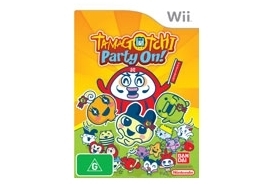 Tamagotchi: Party On! is a truly worthless video game. Avoid it at all costs.

Chalk another one up for the Wii's already loaded party game lineup: Tamagotchi Party On! has arrived. With an uncanny similarity to Mario Party, Tamagotchi might have been able to capitalize on Mario Party 8's weak impact, but unfortunately, it fails. Miserably.

Unsurprisingly, Tamagotchi Party On! has adopted a handful of Mario Party's standard concepts such as dice rolls, event spaces and coin-like "gotchi". However, the core elements that have continued to make Mario Party a successful franchise are missing from Tamagotchi and the elements that remain have been poorly simulated.

It's Who You Know

As a citizen of the world of Tamagotchi, you must compete against your friends or the computer to earn the presidency by racing around a game board and helping citizens to raise your popularity. Whichever player is the most popular by the end of the seven-turn competition is elected into office; it's like high school student body elections all over again.

Tamagotchi has but one single board to play on: Tamagotchi Town. Tamagotchi Town is the central hub for five other towns and traveling between them offers the closest feeling to variety in the game. While game boards in Mario Party flow coherently and involve a small amount of strategizing and quite a bit of luck to win. However, that coherence and any semblance of strategy is completely absent from Tamagotchi.

Tamagotchi town and its suburbs contain a multitude of event spaces. Among these spaces is the "campaign space," which acts exactly like the star space in Mario Party, and whoever reaches this space first is blessed with the opportunity to give a speech. No skill is required to give this speech, it's automatically triggered and the candidate leaves with plenty of popularity points, gotchi and a substantial lead.

If you can't get to the campaign space in time you'll have to rely on mini-game spaces to beef up your popularity. Tamagotchi only has two types of single-player mini-games: mini-game spaces and gotchi-game spaces. "Mini-games" are about as basic as they come, never requiring more than the simplest shake of the Wii remote. If you're lucky you might win a few, but more than likely you'll become frustrated by the unresponsiveness.

"Gotchi games" usually play out like 3-second WarioWare games except, unlike WarioWare, Tamagotchi's mini-games are all identical. They require the player to push 3 of the 4 D-pad directions in some combination to catch a falling flower pot, or something other mundane item. This makes the mini-games excruciatingly hard to enjoy as they are less like exciting diversions and more like redundant recitals.

Tamagotchi Party On! does not give me a single reason to recommend it to anyone. The game is impossible to play with a single player, but the absence of multiplayer mini-games makes this game a complete waste of time for the party gamer--not to mention that actually convincing someone to play this game with you will be a challenge. If you do find some willing partners get ready for an awkward experience because Tamagotchi Party On! doesn't even provide a novel degree of comedic quirkiness, it's just sad.