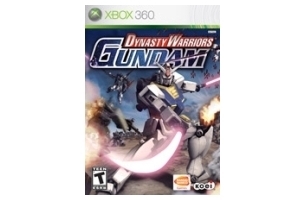 If you can tolerate endlessly replaying the same levels just to progress, light RPG elements like collecting equipment, acquiring skills, and upgrading pilot and mobile suit levels might make up for some aggravation, but even faithful fans of Gundam and Dynasty Warriors alike won't find much in the way of lasting excitement here.

The latest instalment of the Dynasty Warriors series leaves the political machinations of China in the past, and leaps to the distant future to meld with the popular science-fiction universe of Gundam. The strictly single-player experience--a throwaway offline one-on-one battle mode hardly counts--is split between an "official mode" that takes wannabe pilots through missions based on canonical events of the Gundam anime's "Universal Century" timeline, and an "original mode" that spins a strange side story about a mysterious ringed planet and the devastation it brings.

Battles might rage across dull alien landscapes and hollowed-out asteroids instead of plain terrestrial fields and ancient architecture, but Dynasty Warriors Gundam does nothing to change the series' questionable formula. Sprawling battlefields are still divided into linked territories, and tactical success demands constant watch over the bigger strategic picture even as you tear through local enemies by the handful.

Seeing and exploiting a weak spot in the enemy's reinforcement supply path yields some fleeting satisfaction, and the enormous number of enemies certainly lends an epic flavour to every contest, but all the shiny metal in the world can't distract from the fatal flaws that have always hobbled this series. The most noticeable of these is that anything that isn't a territorial boss or a named NPC simply stands around in an idiotic daze, waiting to be cut down.

As a result, regardless of the pilot you choose, which of many unlockable skills you engage, or what robotic parts you equip, you'll feel more like a bull in a china shop than a heroic warrior. The pyrotechnics that attend every swipe of the sword and each frequent special attack sequence are great fun to watch; if only they were as much fun to actually control. A too-close viewpoint makes maximising offensive effectiveness a chore, and the ceaselessly hammering of a melee attack button is more tedious than engaging in its mindless repetition.

But it gets worse: when you're done spending a solid half hour tearing through hundreds of robotic mannequins like a hot knife through butter, you'll face off against bosses with combo attacks that sometimes lay your mech to waste before you're even off the ground, sending you back to square one.

The lack of any continuation scheme means playing through earlier boards over and over again just to gain sufficient strength, and even then there's a good chance the mission will abruptly end when one of your brain-dead cohorts gets himself scrapped; as a result, too many missions become little more than an exercise in futuristic babysitting.