These touchscreen gloves work on capacitive displays -- the best and most accurate kind of touchscreen -- thanks to strands of silver woven through the fabric. You can use every surface of the glove, too, so you're not restricted to fingertips. If you live in a colder climate, if you're thinking of heading to the snow or if you've just got cold hands, these gloves work well.

If you're sitting on a freezing cold bus or train to work and you pull out your smartphone, you'll notice pretty quickly that you won't have much luck working the touchscreen. Normal gloves don't work with capacitive touschreens because they insulate you electrically as well as thermally. Mujjo's 'touchscreen' gloves solve that problem.

These black-and-grey gloves have fine strands of silver yarn woven into the acrylic-spandex fabric, so the gloves conduct the natural current of the wearer's skin — with the end result that you can use a touchscreen as if you were using a bare finger.

The yarn is woven all through the fabric too, so there's no area where the gloves won't work. A quick Google search for 'touchscreen gloves' shows a few pairs that restrict touchscreen use to a few fingertips, so the Mujjo gloves' all-over conductivity is a definite advantage.

The gloves are well made, and are offered in two unisex sizes: Small-Medium (for smaller hands) and Medium-Large (for larger hands, obviously). We tested the Medium-Large gloves on our probably-average-sized hands and found that they fit comfortably, despite being slightly too long in the pinky finger. We think they're well made and should last for a couple of winters at least. 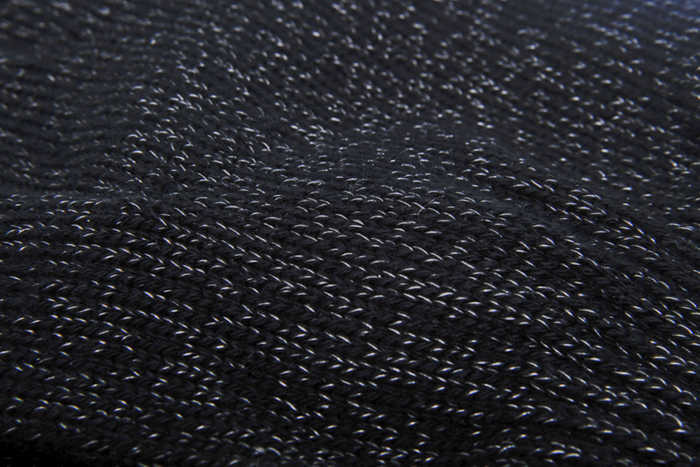 The silver yarn is woven into the fabric of the Mujjo touchscreen gloves.

We tested out the gloves on a range of touchscreen tablets and smartphones, from the ubiquitous Apple IPhone 4 to the much-maligned HP TouchPad. The thickness of the gloves does make typing on a smartphone slightly harder than with bare fingers, but we quickly learned to compensate.

If you're typing on a capacitive tablet keyboard, or the keyboard of a larger-screened smartphone like the Samsung Galaxy Note, we don't expect any problems. We didn't have any issue typing Web addresses and short notes on our test TouchPad.

The Mujjo touchscreen gloves aren't especially thick, but they are warm. Wool would have been warmer and longer-lasting, but it's pricier. As autumn takes hold and winter rolls around in Australia, it's only going to get colder outside.

If you're going to buy a new pair of gloves, and you want to use your smartphone or tablet while wearing them, your choices are limited and Mujjo's touchscreen gloves do a perfectly good job. Let's face it — it's these gloves or a Korean sausage stylus.

We're still waiting on Australian pricing and stockists for the Mujjo touchscreen gloves, but for now they're available from the Mujjo online store for under 30 Euro including international shipping.