MSI's Wind Millions Special Edition U135 is a netbook that looks good and is comfortable to use. It has a balance issue that we've seen in previous Wind netbooks, but we like the U135's build quality, design and features.

MSI has released the Wind Millions Special Edition U135 to celebrate the sale of more than 1 million Wind netbooks worldwide. The MSI Wind Millions Special Edition U135 is a 10in netbook with plenty of style. It has an elegant woven pattern on its lid and a slightly sparkly palm rest, yet it somehow manages to not look tacky or overdone. In fact, the special design, along with a chiclet-style keyboard and glossy screen combine to make the U135 look rather stunning. 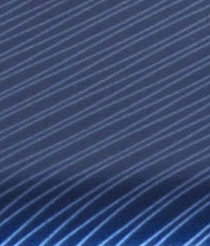 The lid pattern is elegant and understated.

Because it looks so good, this netbook makes you want to just pick it up and use it, take it with you, show it off. And you can do all those things easily because it's small, light and it has a comfortable keyboard. Granted, the overall width of the keyboard will still mean you produce a typo every now and then, and after a while typing will get tiring. However, the keys are approximately 13.5mm wide and 4.5mm apart, so they are easy to hit. The only undersized keys that could pose a problem are the forward slash and the right shift keys. All the keys are in standard locations, and they feel very solid; they don't bounce, nor make an annoying clicking sound when you hit them (except for the delete key, which made more noise than the other keys, perhaps in a bid to encourage accurate typing).

Apart from the patterns and the chiclet keyboard, one of the differences between the Wind Millions Special Edition U135 and previous Wind netbooks is the touchpad. It's a little bigger, measuring 6.3cm across compared to 5.1cm on models such as the MSI Wind U115. The touchpad is responsive and smooth as you glide your finger across it. The left- and right-click buttons share a single piece of plastic. Perhaps due to the extra width of the touchpad, the buttons feel much more defined than on previous models — you won't accidentally left-click when you want to right-click. 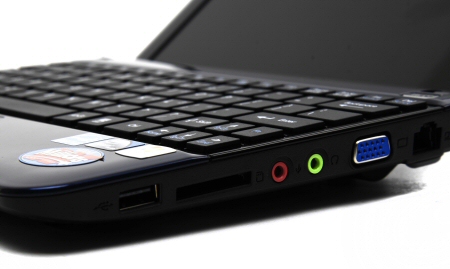 The keyboard is solid and comfortable to use. From this angle you can also see the layout of some of the ports.

One of the traits that the U135 shares with previous Wind models is poor balance. Like all the previous Wind netbooks we've tested, it will almost certainly fall backwards once you lift your hands off the palm rest while using it on your lap — especially if you have the screen open all the way back. This is something you need to be mindful of when using this netbook on uneven surfaces. Apart from this little imperfection — and we really hope MSI can tweak the design of the chassis in upcoming models to improve the balance — the U135 feels very strong. The chassis doesn't creak or bend and the lid is tough; you can press down on it with a good amount of force and puddles won't form on the LED-backlit LCD screen.

The screen itself is very bright and rich. It's perfect for viewing photos and watching videos. Even though it's a glossy screen, reflections didn't pose much of a problem during our tests. It has a native resolution of 1024x600, so it is not suitable for multitasking, and it will be too short for some big dialog boxes. It would have been a real treat if MSI had furnished the Millions Special Edition with a 1366x768 screen, but that would probably jack up the price and at the moment the Millions doesn't actually command a 'special edition price tag' — it's $699, which is the same as many other new netbooks.

For your money you get the latest netbook CPU: Intel's Atom N450 CPU. Like the Intel Atom N280 CPU, the N450 runs at 1.66GHz and has Hyper-Threading, but it also has a built-in Intel GMA 3150 graphics controller and a built-in DDR2, single-channel memory controller. It's also a 64-bit CPU and it's built using Intel's 45 nanometre manufacturing process, which makes it smaller. Because the graphics and memory controllers are built into the CPU, there is no need for two chipsets on the motherboard (one to control the memory and graphics, and the other to control all the ports interfaces). Instead there is only one chipset, which controls the SATA, networking, USB 2.0 and audio ports.

This design means that the U135 can be more power efficient and produce less heat. During our tests the chassis hardly got warm at all — even after five hours of continual use. It has an extraction fan and a side vent (as well as vents on the bottom), but the fan never spun fast and barely made more than a low whirring sound. There was a very slight vibration from the fan, but we really had to stop what we were doing and focus on it in order to feel it. 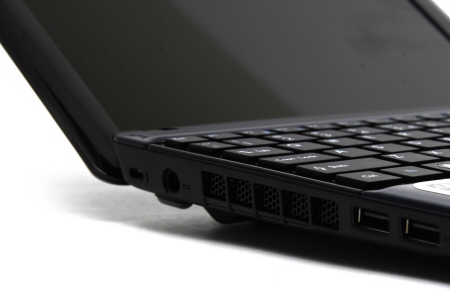 The exhaust fan extracts air through a large vent on the left side of the Wind U135.

With its 1.66GHz CPU, 1GB of DDR2 RAM, integrated Intel 3150 graphics and a 250GB, 5400rpm hard drive, the Wind Millions Special Edition U135 delivers a similar performance to other netbooks. It will run office programs, play media files and allow you to browse the Web without any problems. You can even multitask; as long as you don't have too many open programs and browser tabs, you won't notice too much sluggishness. In our WorldBench 6 benchmark application, the U135 achieved an overall score of 33, which is on par with other netbooks we've tested, such as the ASUS Eee PC 1008HA (Seashell). In the dedicated CPU tests — Blender 3D rendering and iTunes MP3 encoding — the Wind U135 recorded 6min 57sec and 7min 50sec, which is an efficient result compared to many other netbooks we have seen.

The 250GB hard drive recorded an average transfer rate of 22.31 megabytes per second (MBps), which is a comparatively fast time — most netbooks record 16-20MBps. The extra speed can be attributed to the drive's larger capacity, which means the data is packed closer together and quicker to get to. As the drive fills up, it will get slower, but that is the case with all hard drives.

The Wind U135 weighs approximately 1.4kg with a 6-cell battery. In our battery rundown test, in which we loop an Xvid-encoded video while the screen brightness is high, the wireless radio is enabled and power management is disabled, the netbook lasted 4hr 19min. This is in the upper echelon as far as endurance is concerned and you can get a lot more life out of it if you employ its 'turbo battery saving' eco mode. There are various other power profiles in eco mode that adjust the screen's brightness and idle behaviour to suit various scenarios: gaming, watching movies and office work.

Despite the balance problem, we really like the MSI Wind Millions Special Edition U135. It feels solid, looks good and performs as well as a netbook can. It comes with a webcam, an SD card slot, three USB 2.0 ports, microphone and headphone ports, and a VGA port. You also get 802.11n wireless networking, 10/100 Ethernet, and Bluetooth. If you're in the market for a netbook, put this one on your "seriously consider" list.