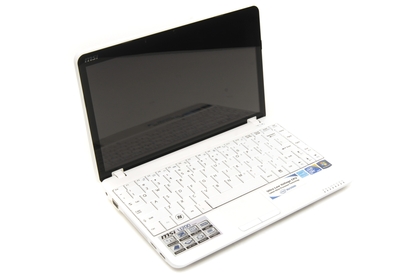 The MSI Wind 12 U200 is bigger and more powerful than a typical netbook, yet it's still small and easy to travel with. We love its keyboard, its battery life is good and its CPU is relatively powerful. Our main complaint is that it's a top-heavy unit, so firm knocks can make it topple backwards, especially when using it on your lap.

MSI's Wind 12 U200 is the first netbook we've seen to ship with Windows 7 straight out of the box. However, with a 12.1in screen and an Intel Core 2 Solo CPU, we're loathe to call it a netbook. It's much bigger than a conventional netbook and a good deal faster, so you can do a lot more with it than just browse the Web and create office documents. And it's much more comfortable to use!

Its 12.1 in screen has a native resolution of 1366x768, so you get a lot more room to view Web pages and edit photos, and its keys are full-sized (18.5mm), so you won't get tired after typing for long periods of time. The touchpad is a good size and very responsive, and the palm rest is generously sized.

Like a lot of MSI netbooks we've tested, the Wind 12 U200 is a little top-heavy. This means that it can sometimes fall backwards if it's given enough of a nudge, which will be a concern when you use the netbook on your lap. However, the balance problem isn't as bad as previous MSI netbooks we've seen, such as the MSI Wind U100, for example. 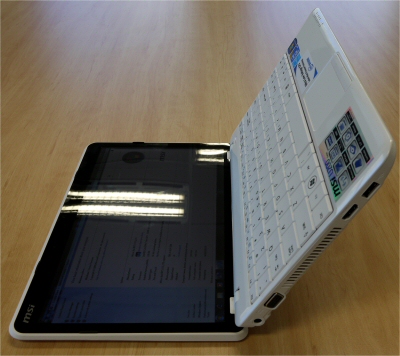 The U200 is top-heavy, and if given enough of a nudge it will fall backward. Keep this in mind when using it on your lap.

Despite the slight balance problem, we like the overall build quality and design of the Wind 12 U200. It weighs 1.4kg and has a frame-less LED-backlit screen, which means that it has edge-to-edge plastic across the screen, similar to the screen on the HP Mini 2140, for example. This ensures that dust and other debris can't get caught between the screen and the bezel. The white shell of the netbook looks and feels good, and the location of the ports is convenient. On the right side, it has two USB 2.0 ports, Gigabit Ethernet, headphone and microphone ports, as well as an SD card slot. On the left side it has another USB 2.0 port, a D-Sub (VGA) port and an HDMI port. A large vent is also present on the left side, and it helps keep the netbook cool and quiet.

The MSI Wind 12 U200 has an Intel Core 2 Solo SU3500 CPU, 2GB of DDR2 RAM, integrated Intel GMA 4500 graphics, and a 160GB hard drive. The Core 2 Solo is an ultra-low-voltage, single-core CPU that runs at 1.4GHz. Despite being slower than an Intel Atom CPU (1.6GHz), the Core 2 architecture of the chip gives it a lot more speed when performing the same tasks.

In our WorldBench 6 benchmark suite, the U200 recorded an overall score of 61, which is approximately 50 per cent faster than what an Intel Atom–powered netbook achieves in the same benchmark. The BenQ Joybook Lite U121, for example, which is equipped with a 1.6GHz Intel Atom Z530 CPU, scored 30. The speed of the U200 is also noticeable when comparing the MP3 encoding and Blender 3D times of both netbooks: the U200 recorded 3min 23sec and 4min 04sec in the tests, respectively, while the Joybook Lite U121 recorded 8min 20sec and 7min 47sec, respectively.

All of these results were achieved under Windows 7 Home Premium, which comes installed on the netbook. During everyday use, we found the netbook to be very responsive and all of its features worked perfectly. You can use the Wind 12 U200 for typical office-style work and Web browsing, but it's also a decent unit for photo editing. This is due to the 1366x768-resolution screen; most screens on 10in netbooks have resolutions of 1024x576 or 1024x600. The HDMI port can also be used to view Web pages and movies on your big-screen TV, and this worked perfectly during our tests. 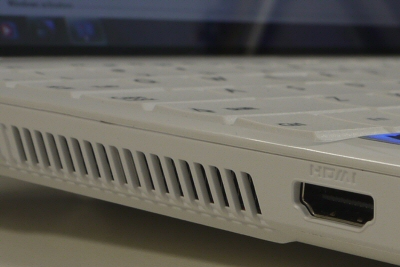 The HDMI port allows you to easily view Web content and videos on your big-screen TV.

A 6-cell battery is located on the spine of the MSI Wind 12 U200, and it protrudes downward rather than toward the rear, giving the netbook a high profile. In our rundown test, in which we switch off power management, switch on the wireless radio, maximise the screen's brightness and loop an XviD-encoded video, the battery lasted for 3hr 56min. This is a good result for a 12in netbook and if you switch on power management, you should be able to get a lot more life out of the battery.

For $999, we think the MSI Wind 12 U200 is one of the best value ultraportable netbooks on the market. It represents a middle ground between a small, under-powered netbook, and a large, fully featured 15in notebook. Seriously consider it if you want a comfortable, highly mobile notebook with good performance and battery life.