A powerful gaming laptop, but you'll pay for it in battery life. 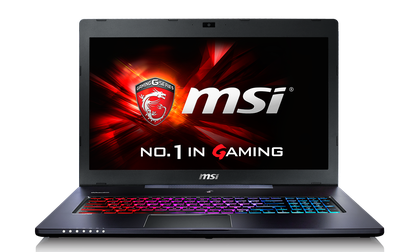 MSI's GS70 is an interesting gaming machine, with a very slight nod towards portability thanks to its thin profile, at least as far as gaming laptops are concerned. There's plenty of grunt under the multicoloured Steel Series keyboard, although that grunt comes with a heavy price when it comes to battery performance.

Luggable But Not Really Portable

Most gaming laptops are absolute behemoths, because they try to be all things to gamers specifically, with large high resolution displays, cutting edge graphics processors and CPUs, and an accent on being a desktop replacement that you also use for keeping earth safe from invading aliens, or whatever your gaming fancy happens to be.

The MSI GS70 takes a kind of halfway bet between more distinctly portable gaming solutions such as the Alienware 13 and more fuller figured gaming laptops. At 419 x 287 x 22 mm (WDH) and 2.6kg, it's somewhat svelte for a 17.3 inch laptop, but there's only so far you can slim down a unit like this. It's definitely something you could stow into a larger laptop bag and not feel in the same way as some gaming laptops, but we'd still put it in the "luggable" rather than truly "portable" category.

To a certain extent, gaming laptops are all about bragging rights, and MSI decks out the GS70 with plenty of eye catching goodies. The star attraction is an Intel Core i7-6700HQ CPU from the current "Skylake" generation of CPUs. That brings with it plenty of processing grunt, as well as a certain amount of power optimisation, at least in theory. More on that later. On the GPU front, the MSI GS70 comes with a Nvidia GeForce GTX 970M 6GB GPU, as well as Intel's own HD Graphics 530 if you're really not going to push it hard. There's 8GB of DDR IV RAM on board, and the display is a 17.3-inch, 1920x1080p panel.

In terms of expansion slots, you get two USB 3.0 and two USB 3.1 ports, two mini DisplayPort sockets, one HDMI socket, gigabit ethernet, SDHC reader and a Kensington lock slot. There's also substantial space given to the side heating vents, which is a very necessary step.

It's Getting Hot In Here

When you start pushing the MSI GS70, the fans seriously kick in. We rather quickly adopted a policy of gaming with the MSI GS70 6QE 017AU using headphones, because the fan noise was quite noticeable. The speakers on the MSI GS70 are decent, but they're overcast far too easily by the noise of the fans.

Despite the fans working hard, the MSI GS70 6QE 017AU can quickly become uncomfortably hot to hold, especially around the fan exhaust ports. It could be handy in the depths of winter to have that much heat coming out of your laptop, but it most definitely means that this is a laptop that you can't actually leave running on your lap unless you like being scalded.

The MSI GS70 features a customisable multicoloured Steelseries keyboard with very good key travel characteristics. If you could somehow convince your boss that this was a productivity laptop, there's no reason why you couldn't do more productivity-centric work with it. The touchpad is recessed and quite large, although it's not always entirely precise for scrolling tasks. Again, with the gaming focus of the GS70, we suspect all of its buyers will have a gaming mouse in mind to pair with it anyway.

Games are still where the MSI GS70 is solidly pitched, and there we had little trouble running just about anything we could find on it at absolutely rock solid frame rates, as long as those apps were installed on the SSD. On the benchmark front, the MSI GS70 recorded 6466 in 3DMark Fire Strike, 3375 in Fire Strike Extreme and 1701 in Fire Strike Ultra. If you're a fan of older games you should have no problem whatsoever; the GS70 managed a very respectable 17,492 in Sky Diver.

The MSI GS70 ships with a combination SSD/HDD setup for storage. The supplied SSD is on the smaller side with only 128GB available, while a 7200RPM 1TB SATA drive handles the heavy drive lifting. CrystalDiskMark showed the distinct difference between the two, reporting read/write rates of 518.4/357.8MBps for the SSD and a much pokier 140.3/133.4MBps for the mechanical drive. Amongst the utilities that MSI preinstalls on the GS70 is a popup to tell you if SSD storage is running low, or more to the point, when it's running low, unless you shift your game files to the larger mechanical drive.

The MSI GS70 ships with Windows 10 preinstalled, as well as a smattering of MSI utilities. Its Dragon Gaming Centre App allows you to set specific games to pre-launch, as well as giving you a quick snapshot of current system performance, which could either be handy or the kind of thing that you quickly uninstall to free up disk space, depending on your gaming preferences.

That means that it's not even capable of getting through a single movie, or for that matter, a reasonable length gaming session on the go. Our test is deliberately brutal, but anyone spending this kind of money on a gaming laptop isn't likely to use it simply to play Solitaire. You might game on the GS70, but unless it's plugged in, you won't be gaming for terribly long.

Every gaming laptop manufacturer will have its Skylake products either for sale right now or for sale very soon; even MSI fits this bill with multiple gaming-centric laptops offering Skylake right now. That's an important caveat, because the MSI GS70 isn't the top of MSI's offerings right now; that'd be the MSI GT72 Dominator, which runs around $400 more than the MSI GS70's $2599 asking price.