A 14in MSI laptop with good styling and ease of use MSI's CX420 is an attractive and comfortable to use notebook, but its configuration needs some refining. It's a hybrid model, which means you can switch between integrated and dedicated graphics, but the performance and battery life differences between the chips is not great. Nevertheless, it's a good choice for anyone who wants a light and well-featured notebook.

MSI's CX420 is a hybrid laptop that's a slightly confusing proposition. On the one hand, its integrated Intel GMA graphics are supposed to give you great battery life, while on the other hand the dedicated ATI Mobility Radeon HD5470 graphics are supposed to give you fast 3D performance. In reality though, the difference between the graphics cards isn't that great, so the ability to switch processors feels like a novelty. However, the MSI CX420 has a lot more to offer than a hybrid graphics configuration: this mid-range notebook is very well built, light, good looking and easy to use, and it's perfect for everyday tasks.

The CX420 has a 14in screen with a 1366x768 resolution and it runs an Intel Core i5-430M CPU, 2GB of DDR3 SDRAM and a 500GB hard drive. This configuration kept pace with Dell's Inspiron 15R N5010, which is also a Core i5-430M–based notebook; it recorded a identical times of 1min 5sec and 60sec in the iTunes MP3 encoding and Blender 3D rendering tests respectively. For everyday office tasks, browsing the Web, editing photos and watching movies, the CX420 is ideal. It can even be used for high-end tasks such as DVD ripping and video encoding, but it's slightly sluggish when performing these tasks. The Dell Inspiron took 1hr 10min to complete our Xvid compression test, while the MSI CX420 took 1hr 22min. Nevertheless, when you've been waiting over an hour for a task to complete, another 12min isn't the end of the world.

The performance results in our productivity tests were the same when using either the Intel or the ATI graphics chip. You can easily switch between the two chips by pressing the 3D and battery buttons — for performance and battery life respectively. When you're using the CX420 on the road, you can switch to the integrated Intel graphics. This chip recorded a score of 1490 in 3DMark06, which means you'll have no problems watching high-definition videos and viewing high resolution photos. The ATI graphics card recorded a score of 3759 in the same test, which is a low score and it means the CX420 won't be suitable for playing games unless you run them at low resolution and with low graphics detail. 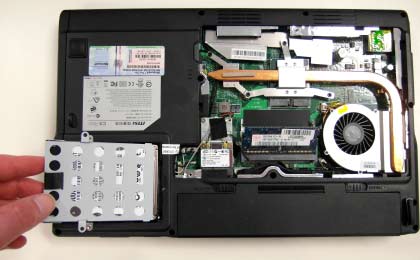 The components in the CX420 are easy to access. There are two RAM slots (one of them is free) and there's a large cooling fan to extract the heat generated by the CPU and graphics chips.

Considering the relatively small difference in battery life and the poor gaming performance of the Radeon chip, we think a graphics card with more oomph would make the hybrid setup more appealing. The Alienware M11x is a good example of hybrid graphics done right: you get good mid-range graphics performance out of its NVIDIA GeForce GT 335M graphics chip and an extra hour of battery life when using its integrated Intel chip.

With a chiclet keyboard and a reasonably big touchpad (7.7x4.8cm), the CX420 is very comfortable to use. You can easily type on it for long periods of time, and because it only weighs 2kg it won't tire you out while you use it on your lap. The screen and body of the CX420 are glossy, and while the notebook looks good the screen is prone to reflecting lights, which can get annoying.

There are features aplenty around the edges of the CX420; you get a built-in DVD burner, three USB 2.0 ports, HDMI, VGA and Gigabit Ethernet ports, and there is also an SD card slot and an ExpressCard/34 slot. Bluetooth is standard, as is a webcam and 802.11n Wi-Fi.

All these features combined with a light weight and good ease of use add up to make this notebook very good value for money. It's a perfect all-round machine for students or even for workers who want something easy to carry to and from work everyday. Become a fan of PC World Australia on Facebook