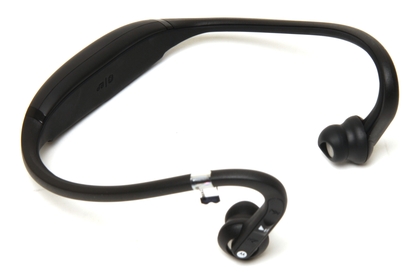 The S9's are comfortable and provide reasonable, if not outstanding audio quality.

Looking like something out of The Jetsons, Motorola's latest accessory to hit the market is actually a handy pair of headphones. Sporting a unique, lightweight design, the S9 Bluetooth stereo headphones offer reasonable sound quality with the freedom of no wires. Although not in the same league as a regular set of quality headphones, sound produced is above average, and the S9 also doubles as a handsfree headset for your mobile phone.

Utilising a behind-the-head design, the S9 is surprisingly comfortable to wear for long periods. Motorola includes three different-sized ear buds in the package (small, medium, large), and provided you get the right fit, the unit feels light and caused us no discomfort. The S9 measures just 126x130x48mm and weighs an incredible 32g, but despite the minimal size and weight, build quality feels admirable; the black plastic is sturdy and the band doesn't feel flimsy. Further, the S9 is water-and sweat-resistant, so it is ideal for use at the gym, or a number of other outdoor activities.

Design is second to sound quality though, and our major concern with all wireless headphones is audio quality, as they simply aren't up to the standard set by their wired brethren. Thankfully, the S9 performs well, even if it isn't outstanding. It still suffers the same major problem that most wireless headphones do (a lack of clarity), but bass levels and crispness are notable considering the unit is wireless. Overall, the sound produced won't satisfy audiophiles, but most people will be pleasantly surprised, especially when compared to some other Bluetooth headphones on the market.

The S9 also doubles as a handsfree headset, although its performance was a little below average in this regard. We had no trouble hearing during a conversation, but our callers repeatedly claimed a lack of volume and clarity despite the volume being at its highest level. This is most likely due to the fact that the S9's microphone is embedded into the right ear bud - as such, it's not quite near your mouth when holding a conversation.

Another minor grievance we have with the S9 is its controls; although the buttons are well positioned, their rubber nature means they require a heavy press to activate, and this isn't really ideal when you're on the move. It also takes a while to memorise the button placement, as we were still pressing the wrong keys after half a week of use. When connected to a mobile phone, you can use the S9's controls to play, pause and skip tracks and adjust volume levels.

The back of the S9 is a chunky piece of plastic that houses a large rubber power button, mini-USB charging jack and indicator light. Pairing is a fairly simple process, simply hold the power button until the indicator light flashes blue three times, and the unit enters pairing mode. The S9 can store pairing information for up to eight different Bluetooth devices - if you try to pair more than eight, the oldest paired device is automatically removed.

Motorola claims a battery life of up to six hours continuous music playback, but we achieved closer to five, which is solid, but far from outstanding. The S9 is charged via a standard mini-USB jack, hidden behind a rubber flap.