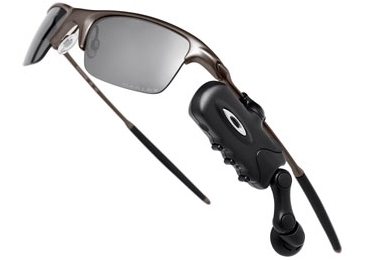 Motorola's Razrwire is definitely a step in the right direction, and for some people may be the ideal solution to ugly, awkward Bluetooth headsets.

We like the technology, but we'd be the first to admit that wireless Bluetooth headsets do not represent the height of sartorial elegance, particularly the ones that sport flashing blue lights. Happily, mobile phone giant Motorola has teamed up with Oakley sunglasses in an attempt to solve the eternal problem of looking daft while wearing a Bluetooth mobile receiver in public. Whether they've succeeded or not is, of course, a matter of taste, but the RazrWire is surely a step in the right direction.

Of course, it's not just about style. Attached to the arm of some rather sporty-looking Oakley sunglasses, the headset incorporates Bluetooth 1.2 technology (backward compatible with 1.1) that functions at a distance of up to 10 meters from a Bluetooth-enabled cellphone and provides as much as six hours of talk time or 100 hours standby.

According to Motorola, the RazrWire is aimed particularly at people on the go such as cyclists, skateboarders, golfers and rock climbers, though we feel if there's any time that it's inappropriate to be answering your phone, it's when you're hanging over the edge of a cliff.

The RazrWire is not Motorola's first foray into the world of fashion - the company has previously unveiled a snowboarding jacket and headgear produced with sporting goods manufacturer Burton.