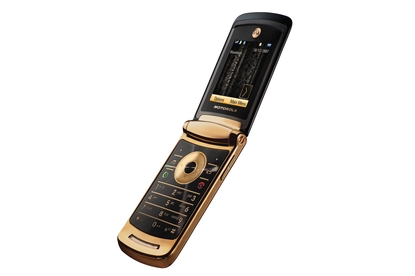 Motorola's RAZR2 V8 LUX is a little pricey, but if you're after a stylish fashion accessory that also packs in 2GB of storage then it may be right up your alley.

It may not bump your salary up to $50 million a year or land you a Spice Girl bride, but nonetheless Motorola's new iteration of the RAZR2 V8, the V8 Luxury edition (or V8 LUX for short) is a great mobile phone. Advertised with none other than David Beckham as its face, this fashion-oriented handset features all the great elements of the original RAZR2 and throws in a new design complete with 18k gold-plated accents. It still suffers from a few niggling issues but those after a smooth, stylish change will find the V8 LUX a great choice.

In most ways the V8 LUX resembles the MOTORAZR2 V9 review earlier, although there are a few differences. The largest is the absence of HSDPA; the V8 LUX is just a regular mobile phone. It also lacks a micro-SD card slot; however, it trades this in for 2GB of storage. This will be more than enough for most users' music, videos and images.

The included music player has quite a funky interface, overlaying several touch sensitive media controls on the phone's external screen when activated so you don't even need to have it open. Unfortunately, Motorola hasn't adjusted the software itself at all, and thus the player is quite basic with no equaliser or proper sorting functions. It also uses a proprietary headphone jack rather than a standard 3.5mm port, meaning you're stuck with the low grade default ear buds.

Typing messages is a breeze thanks to the rather stiff but quite tactile Motorola keypad that has basically not seen any changes since the original RAZR. What has been altered is the design, which, as stated earlier, now comes with a small dose of precious metal as well as an imitation snakeskin pattern on the back. Overall, it is quite stylish with a slim, black and gold colour scheme, although it is perhaps a touch on the gaudy side. We could definitely have done without the reptilian back plate.

However, this is more than made up for by the fantastic 2in 320x240 262,000 colour external display. We said in our MOTORAZR2 V9 review that the unit had the best external screen we'd seen on a flip phone and it hasn't lost its touch this time around. The 2.2in internal display is also impressive, particularly for video content, rendering it brightly and colourfully

The included camera is 2 megapixels and comes with an 8x digital zoom. As usual it is adequate for wallpaper shots but anyone concerned about image quality should look elsewhere.

Like the MOTORAZR2 V9 this handset has Crystal Talk technology, which is designed to help make conversations in loud environments more audible. It operated quite well during our testing although callers did mention some fluctuations in volume. Aside from that voice was clear and sharp.

Battery life is quoted at four to 7.5 hours talk time and 200 to 330 hours standby, both of which are fairly good figures.