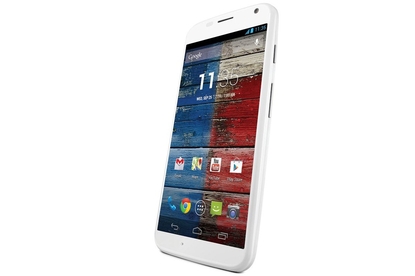 Motorola has officially announced its Moto X Android phone, the first smartphone the company has produced since being bought by Google last year. It offers unique customisation options, claims to have a battery life of 24 hours and introduces always-on voice commands and notifications, but there's no word yet whether it will ever make its way to Australia.

Motorola has opted for a very different approach with the Moto X. Rather than cramming the device with the latest specifications, as most Android manufacturers tend to do, the company claims to have focussed more on user experience and personalisation. The phone is clearly being targeted at everyday, mainstream users, rather than consumers concerned about having the latest and greatest quad-core processors. It's a big gamble, so it will be interesting to see if the market responds.

The highlight of the Moto X is the ability to completely customise its look. Users can chose from 18 backplate colours, a black or white front panel, and seven different colours for the buttons on the side, and the ring around the camera lens on the back. Users can also engrave the back of the phone. The colour and engraving selections are made online using what the company calls "Moto Maker", though the customisation is initially exclusive to the AT&T network in the US. Users can also pick between 16GB and 32GB of storage, but there's no microSD card slot to expand that memory.

The Motorola Moto X is constructed largely from matte plastics. The back curves outwards towards the middle of the phone, so the rear of the device bulges in the centre. The Moto X is just 5.6mm thin at its thinnest point, but 10.4mm at its thickest point. Motorola was keen to point out that the phone is smaller than most competitors, despite having a large 4.7in screen. The bezel surrounding the display is much thinner than most devices on the market, including the Samsung Galaxy S4 and the HTC One, so the device should be comfortable to use single-handedly.

The Motorola Moto X has mid-range specifications. The 4.7in AMOLED screen has a 720p resolution of 1280x720 compared with the full HD screens of most competitors, while there's also a 1.7GHz dual-core Snapdragon 400 processor and 2GB of RAM. Motorola actually brands the internals as the "X8 Mobile Computing System," which consists of the processor and two custom chips for voice recognition and gesture control features. While admitting the internals aren't the most powerful available, Motorola says its irrelevant as the hardware is optimised specifically for the Moto X's features.

The Motorola Moto X runs an almost stock version of Android 4.2 Jelly Bean, but introduces two new features. Active notifications can display notifications on the screen without needing to unlock the device. The phone pulses when you miss a call or receive a message, and a small square on the screen will show an app icon. There's also an active voice recognition system that uses an "Okay Google Now" command to create reminders, set alarms and use a number of other functions.

The Moto X includes a 10-megapixel rear facing camera that doubles as a full HD, 1080p video recorder, along with a front-facing 2-megapixel camera for video calls. Tapping anywhere on the screen in the camera app immediately takes a photo, with focus and exposure adjusted automatically. There's also the ability to hold the Moto X in one hand and twist your wrist three times to jump into the camera app when the phone is unlocked.

Interestingly, Motorola claims the Moto X's 2200mAh battery will last a full, 24 hour day with regular use and all features activated. We'll be very keen to put this claim to the test, as it would be a huge selling point.

The Motorola Moto X will be available through all US carriers this month, but there's been no word on an Australian release.

A promotional video of the Moto X can be viewed below.