One of the best mid-range phones on sale today 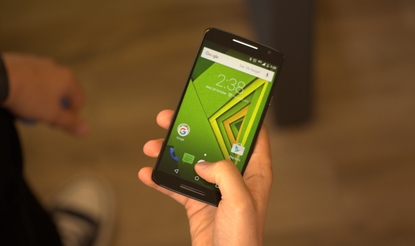 Motorola has broken away from custom by releasing two versions of its Moto X. The Moto X Style, reviewed here, is the company’s 2016 flagship as it wraps Motorola’s most powerful technologies in its most ambitious design. Then there’s the Moto X Play, a mid-range smartphone that discounts hardware and model good looks for better usability and prolonged battery life.

The design of the Moto X Play unequivocally stems from the same gene pool. The smartphone's body curves to the most benevolent of shapes for an easier fit in the palm. An aluminium accent rounding the frame provides a sense of durability and robustness. The inkling is reiterated by a removable back cover, rubbery in texture, that wears treads common to a car tyre. The end result is a smartphone that looks practical, like a sports shoe. Or a torch.

Retained is a distinctively minimalist front packing a 5.5-inch, Full HD display. Its 403 pixel-per-inch density puts it on par with the best screen from Apple, only Motorola’s recipe goes one further by adding a front-firing speaker for stellar music and video playback.

Other features trickle down from the flagship to the benefit of the X Play. A water-repellant coating protects it against sink splashes, pesky rain drops and wet hands. Every smartphone should have such an IP rating, but the reality is the X Play is part of an exclusive club.

Perhaps the most notable commonality has to do with the X Play’s cameras. Both are high in resolution at 5MP for the front camera and 21MP for the primary camera. And both will record videos in Full HD resolution.

Photos snapped with the primary camera benefit from bright colours, balanced exposure and plenty of detail. Motorola’s camera interface, as simplistic as it is, causes the occasional photo to be blurry, as a single tap both focuses the camera and takes the photo. Overall its performance exceeds that of its rivals, the Huawei P8 and Oppo R7.

Google’s mobile operating system, Android, first entered the market in 2008. Today 1.4 billion devices globally run the software. At one stage or another, an Android user would’ve wished the version running on their phone wasn’t spoiled by an aftermarket overlay.

Herein is the beauty of a Motorola smartphone. The former Google-owned company is more concerned with pushing out software updates first, as opposed to redesigning the already comprehensive Android experience.

The Moto X Play being reviewed runs Android 5.1.1. It was the first smartphone handled by this reviewer to feature the vertical application dock. Motorola does not tamper with the software so that its customers benefit from prompt software support. Odds are the X Play will be upgraded to Android 6.0 Marshmallow ahead of its competition, if history is to repeat itself.

Working behind the scenes is less powerful hardware. The Snapdragon 615 chipset houses two quad-core CPUs: the first running at 1.7GHz and the second running at a flat 1GHz. Graphics are handled by an Adreno 405 GPU and it shares 2GB of RAM with the processor. The 16GB of internal storage can be augmented with microSD cards 128GB in size, making it theoretically possible to have a total of 144-gigabytes of storage.

Running a test designed to measure computing and graphic performance, 3DMark’s ice storm unlimited, the Moto X Play returned results best described as mediocre. Its top score of 8709 sits higher than Oppo’s R7 (7,775) and below Huawei’s P8 (9137), though it is well below the standard set by flagship phones, including Apple’s iPhone 6s (28,348) and Motorola’s X Style (19,509).

These scores provide context on the X Play’s place among its competition. No matter, this still is a smartphone with eight computing cores. Using it in the real world is characterised by fluid animations, quick performance and commendable multitasking abilities.

The only carrier offering the X Play on a 24-month contract is Vodafone, with pricing starting at $5 a month on a $40 plan. We loaded the phone with a Vodafone SIM card and ran Ookla’s Internet speedtest from our North Sydney offices. Speeds maxed at 27.9Mbps for downloads and 44.2Mbps for uploads. Downloading a 700MB movie file at this speed would be over in a spiffy three and a half minutes.

Integrated into the body is a large 3630 milliamp-hour battery, which Motorola claims can power the Moto X Play for up to two days. During a week of testing, we recorded results ranging between 27 hours and 30 minutes, to 39 hours and 30 minutes. This is a lot longer than its Oppo and Huawei competition, and frankly, among the best performing battery life results.

All of the basics are covered and covered well by the Moto X Play. It’s ripe for people who cannot stop surfing the web, listening to music or streaming videos. The cameras are above par for its price bracket and it has the kind of battery life that will make it home to the charger.

Many phones are designed to be beautiful, like delicate design pieces. The Moto X Play is less concerned with looking like anything other than a phone. It is too playful to care if it is smeared with fingerprints or scuffed after a day well spent.