Motorola Defy Mini review: A rugged Android smartphone for under $200, but still overpriced. Motorola positions the water resistant, dust-proof Defy Mini as a budget smartphone with a twist, but poor performance and a mediocre user experience actually make it overpriced. The Defy Mini has good battery life and its water resistant casing can definitely handle the elements, but there are far better smartphones out there at this price.

The Motorola Defy and the Defy Mini are two of the only rugged Android smartphones on the market in Australia. Motorola clearly feels it is onto something here, so enter the Defy Mini — a relatively cheap and compact phone that maintains its rugged form factor. Unfortunately, the Defy Mini is dogged by poor performance and is therefore overpriced.

Can definitely take a bit of a beating

Like its predecessors, the Defy Mini is dustproof, water resistant and comes with Gorilla glass that aims to prevent the screen being scratched. The Defy Mini isn't exactly waterproof, but it can handle being splashed with water. We ran it under a tap for around 20 seconds and it survived without any issues. You'll need to make sure the plastic flaps covering both the headphone jack on the top and the micro-USB port on the left are closed before you attempt to drown the phone in water. Both are a little annoying to open, but effectively seal the ports from leaking water when correctly sealed.

Motorola achieves a water resistant seal by using a special lock on the rear case of the Defy Mini. To remove the battery cover, you need to slide the lock to the right and then peel it off. Like the plastic flaps on the ports, this isn't the most intuitive process. The slider requires a real firm push to open. 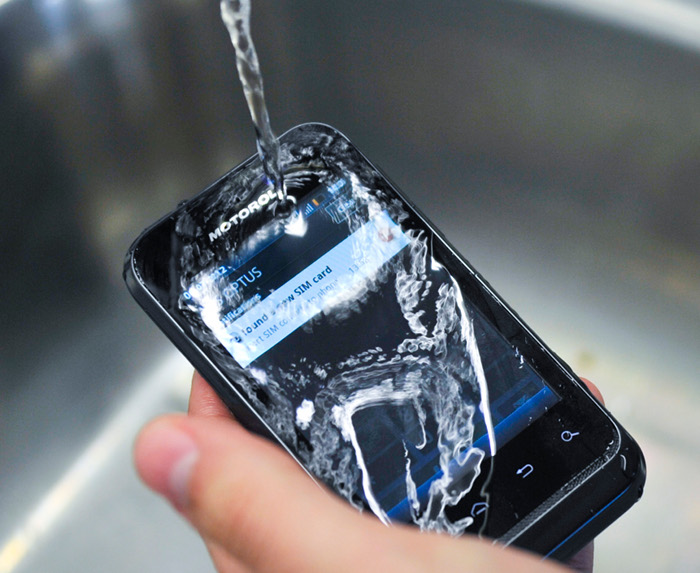 The Defy Mini isn't waterproof, but it can handle being splashed with water.

The Motorola Defy Mini can definitely take a bit of a beating, but it isn't completely life proof. Our review handset was scratched on both the back cover and the screen after a few days of use. You can definitely treat it with some disrespect, but don't expect it to come through completely unscathed.

One of Motorola's selling points for the Defy Mini is its small size, but this is also a hindrance. The Defy Mini is relatively comfortable to hold among a market full of huge smartphones, but its small 3.2in screen makes for a poor user experience. Basic tasks like typing on the extremely cramped on-screen keyboard and browsing the Web are simply frustrating due to the tiny screen. 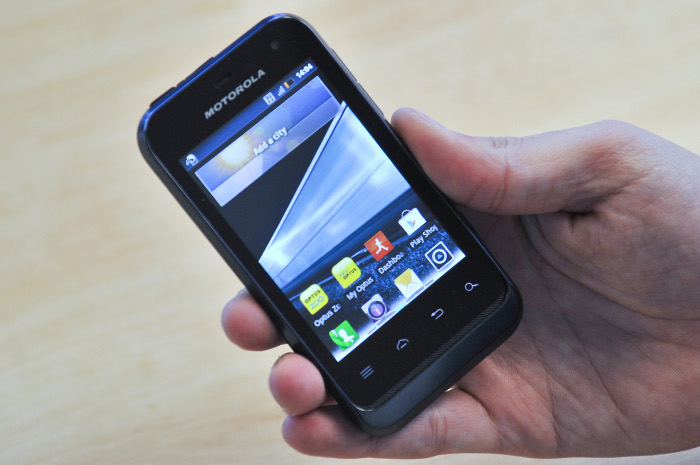 The 3.2in display itself isn't bad. Viewing angles are actually reasonably impressive and performance in direct sunlight certainly isn't the worst we've seen. That being said, the low resolution of 320x480 pixels means that the Defy Mini struggles to display crisp text, even if its colour reproduction is passable. Although the screen is clear, the Defy Mini's display lacks the vibrancy and brightness we're starting to see on most other smartphones.

The small screen is only the tip of the iceberg though, as the Defy Mini is ultimately a very frustrating smartphone to use. The Android 2.3 Gingerbread handset lags in even the most basic operations, like swiping to unlock the lock screen, opening the app drawer and swiping through home screens. While we were never expecting earth shattering performance from a phone that retails for under $200, the 600MHz processor and 512MB of RAM clearly limit performance and usability suffers as a result. Due to its limited specifications, the Defy Mini isn't likely to be upgraded to the latest Ice Cream Sandwich version of Android, either. 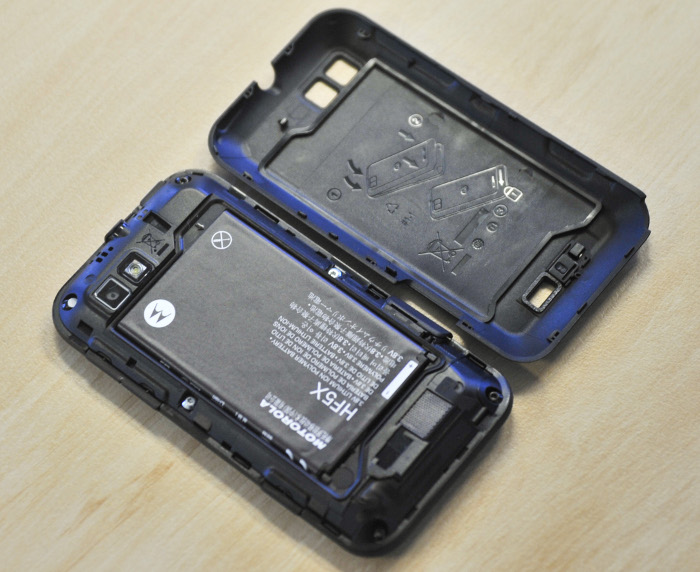 Despite the frustrating user experience, Motorola has added a few nice features in its MotoSwitch UI. We particularly like the social graph widget, which can automatically display your frequently contacted people in an attractive layout. The activity graph does the same for your most used applications. Both of these widgets can be configured manually, if you choose.

The Defy Mini's software also includes some other handy options. We like the ability to sort the app drawer by all apps, recent or downloaded, and you can also configure up to three profile themes. You could, for example, have a set home screen layout of widgets and shortcuts for home, work and weekend. This kind of customisation is well renowned in Android phones, but it's usually reserved for more expensive models.

Motorola includes the Swype keyboard, which does aid text input. However, typing a long message usually requires swiping back and forth if you want to read it back as the small screen can only display around five lines of text at a time. Overall, typing on the Motorola Defy Mini is one of the biggest user frustrations. 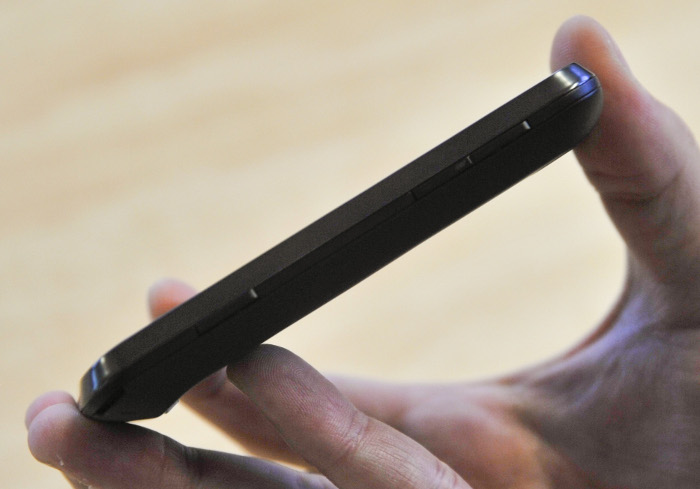 The Motorola Defy Mini has a basic 3-megapixel camera with a single LED flash and a front-facing VGA camera for video calling. The latter is a nice inclusion considering its price, with many phones at the low end of the market shipping without a front-facing camera at all.

The camera captures largely poor quality photos, but this is to be expected. We like the dedicated camera key, which makes both opening the camera app and taking photos a breeze. We're also fans of Motorola's UI in the camera app. It boasts a number of image filters including emboss mono, negative colour and sketch. The volume keys can be used as digital zoom buttons, which is a handy touch that aids the user experience. 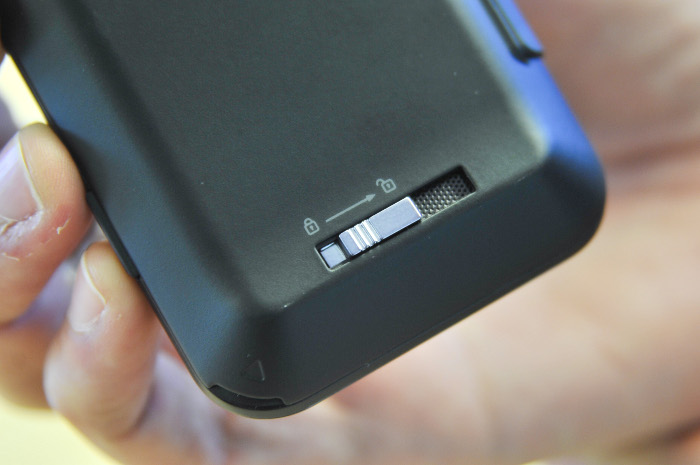 The Motorola Defy has a limited 115MB of internal storage available, but there is a microSD card slot available and Motorola includes a 2GB card in the Australian sales package.

The Motorola Defy Mini's small screen means it has better battery life than many other Android phones on the market. With moderate use, we easily pushed the Defy Mini for a full day of use before recharging. Battery life will obviously depend on a number of factors that vary between users, but for the most part we think the Defy Mini's battery is a real positive.

The Motorola Defy Mini is available now through Optus pre-paid for $199.