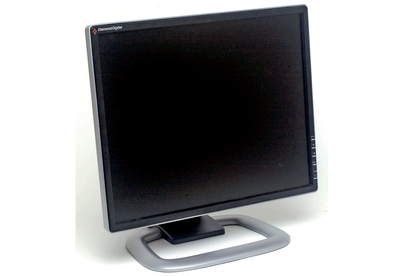 A good 19in LCD monitor for gaming and watching video. It's suitable for everyday tasks, but its colour reproduction will not be to your liking if working with images is your livelihood, or even a serious hobby.

The first thing you'll notice about this 19in LCD monitor is its thin bezel, which is less than 2cm wide all around. The menu buttons are located on the right-hand bezel and they allow you to easily control the brightness, contrast and colour settings. The stand provides height and tilt adjustments, the former being a rare feature among most 19in LCD monitors in this price range, and the rear of the screen has inputs for VGA and DVI ports. The power supply is external, so mounting the monitor on a VESA frame can be done without having to route a thick power cable.

One of this monitor's big selling points is its 8ms response time. The lower the response time of a monitor, the better it will be for gaming and watching movies, as motion blur will be kept to a minimum. Motion blur usually occurs when the pixels take too long to change from displaying one image to the next. We find a good test for motion blur to be scrolling text on a solid background. We used white text on a black background and vice versa. As the text moved briskly from the right to the left of the screen, it was free from trails and it remained fairly solid in colour. On monitors with slow response times, the background colour usually infiltrates the white text as it crosses the screen, with the background colour seeping into the text. We found this monitor to be one of the better ones we have seen in this regard. Likewise, DVDs played back smoothly without any hints of blur or hosting.

Fast panels such as this one usually mean that the colour depth has had to be compromised in order to attain the faster response speed. In tests using DisplayMate, we certainly noticed that the colour palette, especially for grey levels, looked slightly blue in some hues and slightly red in others, and gradients were not smooth, but instead contained noticeable steps. This is an indication that this screen uses a 6-bit panel instead of an 8-bit panel. An 8-bit panel is one which has a colour palette of 16.7 million true colours. In a 6-bit palette, there are only 262,144 true levels of colour, with dithering methods used to achieve more colours. Manufacturers usually quote the colour capabilities of 6-bit panels as 16.2 million or "more than 16 million". In this monitor's case, the specification reads 16.2 million.

Nevertheless, this monitor is perfectly adequate for everyday picture viewing, despite its 6-bit panel, and it is an excellent screen for watching movies and playing games on. It isn't an overly bright monitor, so colours won't wash out the more you turn up the brightness and its contrast level is very good. The limitations in colour that showed up in our grey-level tests suggest that if you work with photographs for a living, then you should look for a monitor with a 16.7 millioncolour rating. If you just want a monitor for everyday tasks and productivity applications, then this one will do very well.