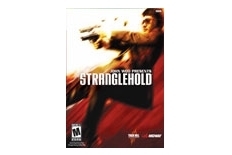 As disappointing as the lack of a compelling online component is, playing action hero is pretty much a solo activity anyway. Stranglehold might stumble occasionally under its own ambitious weight, and might not quite deliver on all its promises and potential, but it's still a unique and absorbing eight-hour tour through a legendary action director's potent unfilmable dreams.

The iconic Inspector Tequila, as portrayed by Chow Yun Fat, is back in this video game sequel to John Woo's 1992 Hong Kong action classic, Hard Boiled, and the intervening years haven't done much to soften his penchant for shooting stuff up.

Though a missing policeman's corpse gets things rolling with a bang, the contrived plot and awkwardly delivered dialogue exist as a paper-thin foundation on which the gunplay is built. It's disappointing but when was the last time you demanded Oscar-calibre performances from an action film, let alone a video game?

As ham-fisted as the facial contortions of these digital actors might be, there's no denying the pleasure of glossy style unhindered by complicated substance. Every last area is completely devoid of civilian presence, so there are no innocent bystanders to protect or moral ambiguities to weigh. The result is initially jarring in its sterility, making you feel more like an actor on a sound stage than a super-cop on a mission. Once the lead starts flying, though, the proceedings are so drenched with cinematic flair that you'll cease to care.

The truth of the matter is that the environment isn't just a character in Stranglehold: it's the true star of the show. Whether you're pounding through a Hong Kong Marketplace or racing down rows of terra cotta soldiers in the Chicago History Museum, damn near every last inch of scenery is just waiting to be laid to waste. Bullets streak through the air with visible trails and slam into walls and obstacles, disintegrating anything unfortunate enough to be in their flight path.

The little details also shine: hit a wall near an enemy, and the plaster launched at his face might force him to cover his eyes. Take out a support beam bestowed with a telltale glint sparkle, and tonnes of concrete could crush your foes, or trigger a fiery explosion that sends rubble and bodies flying. Not even enormous marble statues and dinosaur skeletons are immune from being pounded into a fine dust. This all makes for rich and detailed visuals, but the fact that precious little cover lasts long also keeps the action moving.

The controls behind all this gunplay are interesting as well. Running and gunning is simple enough, thanks to the omnipresent reticule in the centre of the screen that lights up red any time a fleshy target rests behind it, but Tequila interacts with the environment in ways no other action character can. Run into a table, and he'll slide across it like a greased-up Duke of Hazzard. It's hard to shake the feeling that you're skating when you start diving through the air and grinding down banisters with the left trigger. Think of it as Tony Hawk with submachine guns.

Everything you can exploit lights up when you're in range, from banisters to rolling service carts to crystal-laden chandeliers, and doing so automatically kicks in slo-mo Tequila Time, letting you perforate scumbags before they get close. The more you take advantage of the environment during each prolonged slaughter, the more style points you'll rack up, which in turn fill up a Tequila Bomb power meter you can tap for health, a long-range slo-mo precision shot, a temporary god mode uber-ammo rampage, or a dove-releasing spin attack that drops every fool in range.

As empowering as all these options are, the whole business is fundamentally repetitive. With only rare exceptions--like controlling a helicopter's gun, or manually deploying guitar cases packed with supplies--your job is to simply stampede from one colossal set-piece to another while killing anything that moves.

That enemies react realistically when shot in particular body parts is a nice touch, but every thug seems to withdraw from the same animation bank, causing them to blend together into one generic bad-ass, whether wielding a sniper rifle or a set of throwing blades. Similarly, you'll run into showdowns pretty regularly, where you must lean away from gunfire Matrix-style with the left thumbstick while targeting with the right, but these encounters quickly come to feel hollow and gimmicky, and fail to capture the true tension of John Woo's signature Mexican stand-offs.

Apart from its inventive destructible environments, there are two things that save Stranglehold. The first is its shrewd pacing: new weapons, abilities and environmental interaction options are introduced often enough to sustain strong interest, and the difficulty ramps seamlessly from early grunts that drop from a single gunshot to psychotic charging bulwarks that absorb entire clips.

The other is the flexibility of the combat system. You might die too often because a particular pillar or wall corner won't let you adhere to it the way it's supposed to, but whether you play run-and-gun or stop-and-pop is up to you and your skill level more than blind luck or developer handholding will determine your rate of progress. Freedom of play style makes up for a lot in a world that comes apart at the seams too readily, even if it can't quite elevate the experience as a whole to must-buy status.

All dressed up, nobody to shoot

Unfortunately, as compelling as the single-player campaign is, the multiplayer mode is woefully underdeveloped. Featuring only deathmatch and team deathmatch modes, a maximum of six players, downgraded online graphics, and less impressive versions of the seven main environments, there's just not much to keep you coming back for more. Even Tequila's unique powers don't quite fit, with slo-mo that can only be triggered with a full meter, and painfully unbalanced insta-kill manoeuvres granted to whoever best memorises paper crane power-up locations. Expect a hard time finding matches before long.