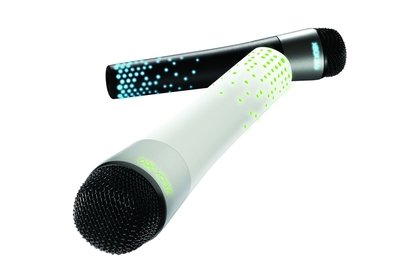 Lips isn't a perfect party game by any means, but it does get enough right to make it worth a look. If shouting unmusically with your mates sounds like a barrel of fun, this game won't disappoint.

There was a time when the thought of karaoke in the living room filled regular, right-minded people with the utmost dread. With the exception of masochists, why would anyone want to subject themselves to the unmusical warbling of their friends and family when they could just gouge out their eardrums with a fork instead? Given a choice between these two extremes, any normal individual would be rummaging through their cutlery drawer within the first song’s opening drum roll. (Especially if your family sounds anything like ours.)

But all this began to change with the release of SingStar on the PlayStation 2. Suddenly, karaoke was cool again, and everyone from teenybopping girls to grandmas in their 90s were crooning along to pop’s greatest hits. Outrageously, even red-blooded males were getting in on the action: it was as if the whole world had gone insane. We don’t pretend to understand this phenomenon — we don’t want to understand it — but the fact is, karaoke is back in vogue and it has changed the landscape of videogames forever. Without SingStar, there would be no Buzz, no Guitar Hero and arguably no Nintendo Wii. Which brings us to the latest party game to jump on the musical bandwagon.

Up with the zeitgeist as usual, Microsoft has finally decided to release a microphone game peripheral to compete with Sony’s decade-old franchise. The result is called Lips. ...It doesn’t have the same ring to it as SingStar does it? The game could be anything from a language translator to a cold sore simulation. (Mind you, Microsoft has always been rubbish at naming its party games, with the pun-tastic Scene It? the Movie Trivia Game being the worst offender.) Dodgy naming aside, does the New Kid(s) on the Block have what it takes to tackle the King of Pop? [Oh dear — Ed.] Like the included tracklist of songs, the results are a little mixed.

Comprising a pair of wireless touch-sensitive microphones and a disc of 40 songs, Lips has everything the karaoke enthusiast needs to rock out in their boudoir (with the possible exception of a like-minded acquaintance). The main game mode is a fairly straightforward sing-along, in which you try to score points by nailing the lyrics that appear at the bottom of the screen. Score enough points during a song, and the game grants you a Star Stream, which multiplies your score for a limited time. The scoring mechanics are incredibly simple and can be roughly compared to the Guitar Hero series (Star Stream is basically Star Power with a microphone).

Naturally, the game also offers a handful of 'Vs.' modes, in which you pitch your voice-box (see what we did there?) against a friend. These include Vocal Fighters (a sing-off between two animated avatars), Kiss (score points to make two silhouettes kiss) and Time Bomb (which employs the microphone’s motion-sensitive technology to douse a lit bomb fuse). While they’re all kind of fun, we actually preferred the main game mode, mainly due to the music videos that accompany each song. If you’re a fan of '80s cheese, prepare to be doused in a glorious avalanche of the stuff (we defy anyone not to Walk Like an Egyptian while watching the famous Bangles clip).

Curiously, Lips does away with the system of unlockable rewards that you’d usually find in a game like this. Instead, all 40 tracks are available right from the get-go. This robs the game of any sense of progression and is bound to irk hardcore gamers (other than improving your score, there is absolutely nothing to work towards). On the other hand, casual gamers will doubtlessly appreciate having instant access to everything the game has to offer. We still think it’s a bit of an error on Microsoft’s part though: one of the joys of the Guitar Hero franchise is unlocking a much-loved song and playing it for the first time.

As with any game of this calibre, the overall success of Lips will depend on whether you dig the tracklist or not. Despite the inexplicable presence of Shannon Noll (no, really) we were quite impressed by the songs on offer. As you’d expect, the tracklist is primarily pop-focused, although there are a few quintessential rock anthems and '50s throwbacks added to the mix. From Coldplay to Cold Chisel, there is something on there to suit almost every taste. (Microsoft has also promised new downloadable content via Xbox Live.) Unlike some music games, the tracks are all masters from the original recording artists, which helps to give that added oomph.

Rather coolly, you can also import your own songs if you own a compatible music player. This gives you the ability to sing along to absolutely anything that takes your fancy — from nu-death metal to nursery rhymes. Unfortunately, the lack of onscreen lyrics or videos makes this a bit of a gimmick at best. (The same thing can be said of the 'percussion accompaniments', which allows onlookers to add tambourines and cow bells to songs via their Xbox controller. Cow bells?)

All up, we must confess to quite liking Lips, despite its numerous flaws. We’re not sure what this says about our manliness, but stuttering along to Rihanna’s "Umbrella" proved disturbingly appealing. [Emphasis on disturbing — Ed.] As far as Christmas gifts go, it’s definitely a winner.