The latest Zune firmware lets you identify and download songs heard on the radio, but other than a capacity boost, little else has changed. 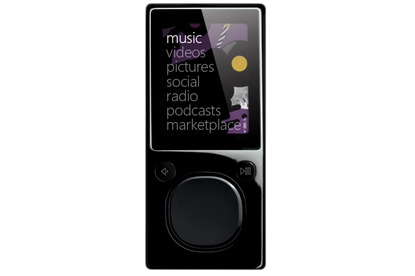 If you prefer something extremely lightweight that integrates with a lot of third-party speakers and accessories, the fourth-generation 16GB iPod Nanos may be a better choice. All of these devices are available for about the same price as the Zune, so unless you're a big fan of Zune's software and the Zune Marketplace, you can probably find a better value elsewhere.

When PC World reviewed Microsoft's previous Zune flash player last fall, we questioned whether support for wireless and for video was overkill on a device that holds only 8GB of content. This fall, Microsoft addressed the storage limitations by adding a new 16GB model to its flash family.

But other than expanded storage and a glossy black case, the main changes involve the Zune 3.0 firmware--which is not preinstalled on the new Zunes (you must visit Zune.net to obtain it). What's more, the player's new features, though interesting, serve mostly as incentives to get you to buy from the Zune Marketplace.

The 16GB Zune retails for US$200--the same price that the 8GB Zune carried when it debuted. Size (including the 1.8-inch screen), weight, and the device's battery life (according to the company's spec) remain the same for the $200 Zune 16GB. At 0.3 inch thick, the 16GB Zune is noticeably bulkier than the 0.24-inch third-generation iPod Nano; it also weighs a bit more, at 1.7 ounces versus 1.3 ounces for the Nano.

The Zune supports AAC, MP3, WMA, WMA lossless, and its own DRM format for Zune Pass subscriptions. In case you'd sometimes rather listen to radio, the Zune includes a built-in FM tuner.

In our lab tests, audio quality was good, but the player's 20-step digital volume control doesn't permit much fine-tuning. On certain tracks, sound would be too low at one step and too high at the next. The player's signal-to-noise ratio of 80dB is consistent with its predecessor's and comparable to that of some of our highest-ranked players.

Video looked okay when played back on the device, but I wish that the screen had been expanded in the new models. Still, it's fine for watching TV shows or short clips, which is all that the Zune Marketplace offers anyway. Zune owners can preview and download shows from NBC, Fox, and cable networks such as MTV, Bravo, and Comedy Central from the Zune Marketplace.

The 16GB Zune retains the 8GB version's touch-sensitive control, which doubles as a clickable D-pad controller so you can scroll in four directions. When you select an artist and an album, scrolling up or down takes you through songs on that album Scrolling left or right switches to other albums by the same artist. Overall, the Zune has a very intuitive interface.

The most significant new features in the Zune 3.0 firmware are 'Buy from FM' and built-in wireless. Unlike Apple's 'Genius' feature, which applies only to newer iPods, Microsoft's free firmware upgrade is available for all generations of Zunes.

'Buy from FM' is a nice feature if you listen to music on the radio often. When you come across a song you like, you can tag it by clicking the center button--and if you're in a Wi-Fi hotspot, you can download it immediately. If Wi-Fi isn't available, your device will form a queue of songs for download.

Since I rarely listen to the radio, I can't see myself using this feature. But Microsoft claims that 50 percent of Zune owners use their built-in radio regularly, and 'Buy from FM' is certainly a useful feature for them. The tagging capability comes in handy for identifying songs that you like but don't know the name of.

The wireless feature also allows you to find, buy (at $0.99 per song), and download content from Zune's Marketplace while on the go. If you have a Zune Pass ($15 per month), you can download or stream an unlimited number of songs directly to both your player and your computer.

Microsoft announced that it is partnering with McDonald's to provide free wireless for Zune customers at about 10,000 restaurants. We weren't able to test how well the players respond to ketchup spills.

As with the 8GB Zune, you can share playlists, songs, albums and podcasts with your Zune-owning friends within a wireless range. It's a great feature, but you can listen only three times to any song that you receive in this way; then you have to buy it from the Zune Marketplace if you want to keep listening to it.

Other updates include Audible.com audiobook support, a couple of free games (Texas Hold 'Em and a puzzle game), and a home-screen clock.

Overall, the Zune 16GB offers some nice features, but despite its new firmware and doubled capacity, there are better flash players on the market. If you're looking for maximum storage space, the SanDisk Sansa View offers a 32GB player; and the 16GB Creative Zen X-Fi, our top-ranked MP3 player, lets you expand your storage via SD Card.