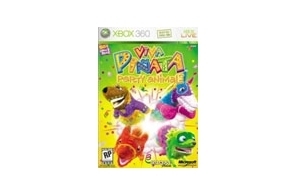 This isn't the type of a game an adult would come back to repeatedly. You can mess with it for a while, rent it for a party, but unless you have munchkins running around (and don't mind encouraging them to burp at paper sailboats) you may not want to shell out full price.

Viva Pinata Party Animals is squarely aimed at a specific audience populated by those that find burping hilarious and think cartoon violence and comic mischief are peak entertainment; i.e. children. This is not to say that others can't get some enjoyment out of this game, it's just to say that it is, after all, a mini-game collection for little kids.

From the multitudes of Viva Pinata breeds, four styles have been selected with a male and female for each -- though why they suddenly have genders is anyone's guess. Four player free-for-all matches are great both online and via local multiplayer. Game options aren't terribly extensive, but you can always enter a practice mode to quick-pick your favourite mini-games.

Each round of the Party Animals Championship Challenge starts off with Pierre Parrybo making some comments in his pseudo-French accent. He talks constantly throughout the game as Pecky Pudgeon's sarcasm dots the dialogue. Unfortunately, the game would have benefited greatly with more voice samples as both characters end up repeating the same lines pretty much every round.

A medium-sized match will span five races with two mini-games in between. The races are fun, but we wish there were some animated transition that would pick your character up when you fall off the track, rather than just the abrupt rewind to the previous moment. Also, the game doesn't appear to have any reverse controls, which means you'll experience that jarring jolt if you get stuck facing a wall for too long.

The mini-game interstices are the most interesting part, since races always repeat while the mini-games are random. Of course, you'll be competing in the famous burping boat race, but there are other activities too, almost all of them involving some serious "candiosity". Smashing pumpkins for candy is one of the fun ones, while painting an arena with as much of your colour as possible, whacking tethered inanimate pinatas (of all things) are also pretty good. For every relatively enjoyable game, however, there seems to be at least one with somewhat wonky controls, like the Loather whacking pirate ship game, which requires you to aim -- not necessarily at the bad pinatas -- until a little target shows up.

Party Animals' graphics deliver everything we had been taught to expect from Viva Pinata: super bright colours and fast-paced action that goes perfectly with the kiddie theme. Each character has their own animations, which is one of the most differentiating factors -- not that it goes any deeper than cosmetic. The whole game is full of energy, down to the music and voice acting -- which is often in French, for no real reason, it seems.

At the end of the day, this isn't the type of a game an adult would come back to repeatedly. You can mess with it for a while, rent it for a party, but unless you have munchkins running around (and don't mind encouraging them to burp at paper sailboats) you may not want to shell out full price.