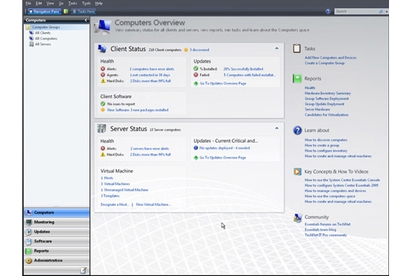 Micosoft System Center Essentials 2010 adds some welcome touches to update deployment and removes a lot of the mystique around how to deploy virtualisation technology in the middle market. It can also save staffers a lot of time through better monitoring and better software installation methods. The redesigned interface is simple and comfortable, and the product's limitations are few - and all in all, it's appropriate for a product that's lighter than the full System Center suite. On the other hand, it's not right for your business if you're already in the upper bounds of the projected user range (more than 400 PCs), if you run a very heterogeneous environment either on the client or on the server, or if virtualisation isn't at the top of your company's to-do list.

System Center Essentials 2010 is the latest revision to the integrated systems management suite designed for midsize businesses. Microsoft already offers the full System Center suite for enterprises but has recently focused on filling the gap that often exists between product offerings for tiny shops with fewer than 25 people and global corporations with 5,000-plus users.

Microsoft has a pretty wide definition of what a midsize business looks like: It suspects such a business has between 25 and 400 PCs and five to 50 servers, doesn't already have systems management software, has fewer than five IT generalists in its internal support operation and predominantly uses Microsoft software. (Clearly that's a model picture in Microsoft's view.) Obviously, this vision is a bit more likely in the smaller end of that space, with more heterogeneity probable in the upper end of the midsize market.

In any event, Essentials 2010 is designed to help make an environment not managed by specialists every bit as efficient and healthy as one that is. Essentials 2010 attempts to achieve three key goals:

Essentials 2010's interface will be comfortable for Outlook users; the team redesigned the interface to be more fluid and expose more functionality with fewer clicks. The administrative console is easy to navigate. Thanks to the comprehensive task list that appears in the pane on the right, we didn't spend a lot of time looking for features.

At its core, WSUS attempts to automate the patching process as much as possible. Between Essentials and WSUS, the tools can discover which updates are required in your environment and set auto-approval deadlines for update deployment; these are the dates at which a particular update will automatically be deployed, even without an administrator's explicit approval.

Another feature is the ability to perform those update installations according to the class of machine - workstation or server. Since patching is likely a manual process in these environments, Essentials tries to take the menial work out of the task and improve system health. In the end, it works pretty well.

Essentials also attempts to make the process of deploying software much more streamlined than running software discs around an office. It puts an attractive, easy-to-use interface around Group Policy-based software deployment and also adds some intelligence found in the suite's big brother, System Center Configuration Manager, so that pushing out Office to 150 clients, for example, doesn't take weeks.

We found the deployment wizards much simpler to understand than the native Windows Server/Active Directory tools. The additional capabilities for non-Microsoft Installer-based software packages not found natively in Windows are also welcome.

The virtualization phenomenon is in full swing, and one could reasonably wonder why Essentials 2010 took as long as it did to integrate virtual machine technology into its core. Quibbling aside, in Essentials 2010 Microsoft has added virtualization hand-holding for the IT generalist: there are wizards to perform many common VM-related tasks, including building new virtual machines from scratch and importing existing VMs into the Essentials management console, with support for both Microsoft's VHD format and VMware's folders. Templates can be used when creating VMs to achieve consistent performance and "spec'ing" of your VM farms, and a tool that intelligently decides the best host for a particular VM is included as well.

Converting existing physical machines to VMs, a process known as P2V, can be handled from within the Essentials 2010 console. And once the VMs are created and placed, and the Essentials agent installed on them, they can of course be managed and monitored like any computer on the network. You can also live-migrate VMs as well (that is, move a virtual machine from one host to another without any downtime).