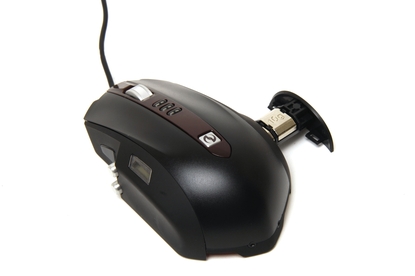 Microsoft has thrown everything but the kitchen sink at this mouse in an attempt to offer more features than the competition. While they don't all work, this is still a solid gaming peripheral with an impressive level of customisation. However, some gamers may find the design a little bulky for their tastes.

Buying your first dedicated game mouse is a hardcore gaming rite of passage. It marks the turning point where you cease to be a casual enthusiast and become a fully-fledged fanatic. Suddenly, topping that leader board seems more important than sleep, food or loved ones, with each fresh kill -- and accompanying barrage of trash-talk -- bringing you one step closer to sweet, euphoric victory.

Naturally, any type of gaming device that gives you an advantage over the competition is considered fair play -- this is war after all, where an extra nanosecond of response time can make all the difference between life and 'pwnage'. It is therefore perfectly reasonable for gamers to prize their mouse of choice in the same way that Rambo cherishes his bazooka. (It's a fetish thing, apparently.)

Having stepped boldly back into the gaming arena some years ago, Microsoft has finally decided to resurrect its gaming mouse in an attempt to appease the hardcore contingent. According to pre-release hype, the new Sidewinder has image processing of 7080 frames per second, a maximum acceleration of 20G and a maximum speed of 45 inches per second. While this all sounds suitably impressive, such stats are largely irrelevant when compared to how a mouse fits into your hand -- if it doesn't 'feel' right, no amount of extra precision is likely to win you over.

Unfortunately for the Sidewinder, this is one of the few areas where it failed to impress us. With overall dimensions of 75x129x50mm, it is an uncomfortably large unit which is bound to alienate certain types of gamers (those who favour their wrist for manoeuvring will be particularly hampered by the bulky design, for example). On the plus side, all 10 buttons on the Sidewinder are intelligently laid out and should pose no problems for scatterbrained gamers; even in the most anarchic of fire-fights. We were particularly impressed by the pair of metal thumb buttons on the left-hand side of the unit. At first glance, they appear bizarre and obtrusive, yet are actually quite intuitive to use -- we even found ourselves clicking them during regular Internet browsing, giving an indication of how instinctively placed they are.

As has become essential for a modern gaming mouse, the Sidewinder comes equipped with a trio of buttons which adjust DPI sensitivity on the fly (400, 800 and 2000 are the default settings, though these can be adjusted for personal taste). This naturally makes it a lot easier to draw a bead on an enemy's noggin, along with any other pixel-perfect task a game demands from you. In a somewhat superfluous gimmick, a tiny LCD screen has been built into the unit's side to display the current DPI setting. We can't think of anyone who would find this in the least bit handy, but at least you'll have a cool looking mouse at LAN parties.

Another fairly pointless addition on this mouse is the 'Quick Launch' button, which takes you directly to Games Explorer in Vista. As the button isn't customisable, its value is severely limited -- especially for Windows XP users. Otherwise, the remaining buttons are fairly impressive, offering a tactile and responsive performance across the board.

Picky gamers will be pleased by the level of modification offered by the Sidewinder, thanks to an extensive set of accessories. Four mouse weights have been included in the sales package, up to three of which can be slotted into the unit at any one time. Likewise, three sets of mouse feet (plastic, Teflon and half-Teflon) will ensure your mouse glides around in a manner to your liking. Handily, all accessories can be stowed inside an included storage box, which also doubles as a cable anchor -- just slide your USB cord through the lid's slot for an optimum configuration.

All up, this is an above average gaming mouse that some are bound to like more than others. For our money though, it falls just short of the excellent Logitech G9, which remains our weapon of choice.