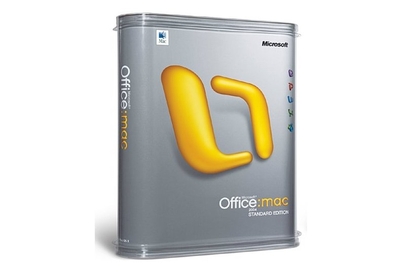 Quite simply, a must for every Mac user. Office for Mac combines the best of Windows with a few brilliant touches to ensure its transition to the other side is a smooth one.

The biggest issue for both current Mac users and those who are considering "turning to the dark side" is the lack of viable and compatible software for the Mac OS X operating system. While most understand that Mac OS X provides a more stable and secure platform to work with than Windows, the fact of the matter is, most of the population use PCs and thus require some sort of interactivity between machines if they were to use a Macintosh. Well, Microsoft of all companies has provided at least some of this support with Office for Mac 2004, the latest version of the popular Windows Office Suite.

If you're a Windows user you'll find this program as easy to use as ever - in fact, it is probably even more user friendly than the Windows versions. The package includes Microsoft Entourage, PowerPoint, Word, Excel and the latest version of MSN Messenger for Mac. In good news for previous owners and Windows users, Office 2004 is fully compatible with Office 98 Macintosh Edition or later and Office 97 for Windows or later.

The star of this package is undoubtedly the new Project Center, an exclusive feature that helps you organise and manage any type of Office project. The Project Center can be found in Entourage, which is the Office calendar and mail application, but it is also conveniently accessible from the other three data applications; Excel, PowerPoint and Word. The Project Centre can be used to create a new project of any shape of form and includes the ability to create links to other documents, assign deadlines and create new tasks. We found the inclusion of this little number to be a superb addition to an already great package. It's easy to use and especially hassle free to link documents in an entire project. Furthermore, the switching between Office applications is a feature that Windows users of this product have come to know and love and now Mac users can finally share in these same convenient functions.

Entourage is the email and calendar application and features upgrades such as spam filtering, archive for messages and a column view. Mac users will definitely be happy with the interface of Entourage, as it has finally been brought up to the standard of the many Office suitss for Windows. However, we still prefer Apple's standard email client, Mail - which is included with the Tiger operating system on our iMac G5. If however, you need integration with documents and the like, then you'll find Entourage the better program.

For Word and PowerPoint, Microsoft has kept the changes to a minimum, but when they have decided to tweak these programs, they are definitely changes in the right direction. The track changes feature is the most notable upgrade in Word, with this finally being brought onto par with the Windows version. We had no troubles using it, as it is basically the same as the Windows version of this software.

PowerPoint, which is now in direct competition with Apples own keynote, contains over 100 new templates and more than 200 animations for your presentations. For business purposes, PowerPoint is the way to go, but if you're after a more graphical approach then we would suggest the effects of Keynote would be more up your alley.

Compatibility scores well in this instance also; we had no problems transferring a Mac Word file to a PC or vice versa. This is ideal, especially for those who may have both a PC and a Mac in an office environment.

Overall Microsoft Office for Mac 2004, is an excellent suite that we feel should be part of any Mac machine you own. Its ease of use combined with the reliability and legacy of the popular Office program has been directly transferred to Mac OS X and the results are pleasing.