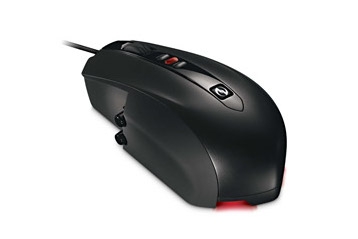 Microsoft's Sidewinder X5 might not be the most advanced or feature-filled gaming mouse on the market, but its combination of precision, customisable buttons and comfortable design makes it a worthy choice nonetheless.

Sporting an intimidating all-black design, the Microsoft Sidewinder X5 is a somewhat simple but quite effective mouse for gaming enthusiasts. It doesn’t feature a plethora of gimmicks like adjustable weight or an LCD display, but it does have on–the-fly DPI adjustment and several programmable buttons, as well as extremely accurate tracking, making it a good, no-fuss solution for gamers.

The design is quite chunky compared to other units on the market. It has a quite bulbous rear that might not suit users with small hands. However, we found the curved, ergonomic design to be comfortable. Despite its size, the unit is extremely light, weighing 20g less than the older Sidewinder. This means it slides around the mousepad effortlessly. Some users may miss the adjustable weight system, but we found the X5 pleasing to use.

It sports a 2000 DPI laser sensor, which is one of the more accurate tracking solutions on the market right now. We tested it extensively with some FPS titles and had no complaints about its precision. It isn’t quite up to the level of some of the ultra-high-end competition from Logitech (like the G9, for example) but it will still do the job for most users.

One of the funky features of the X5 is the side buttons. Rather than being flat and elongated they are small and circular. This makes them a lot harder to accidentally press. At the same time they are still extremely accessible and responded well during our testing.

As you’d expect, you can program them to do whatever you want via the Intellipoint software, including assign macros. Also programmable is the scroll wheel, which can not only be pushed down but tilted to either side, giving a further three customisable controls, which should be more than adequate for most. There is also a button further back that brings up the Windows Games menu in Vista, but we found this to be mostly useless.

The only other controls of note are the on-the-fly DPI adjusters. Anyone who has used a modern gaming mouse should be familiar with the concept. There are three buttons and they correspond to different sensitivities, allowing you to adjust your mouse in-game at the touch of a button. It is pretty nifty for FPS users who want different configurations for different weapons, but a lot of other users will probably not take advantage of them.

If you’re after a mouse that is less slick and flashy and slightly more imposing than some others on the market, then the X5 is probably a good choice. It is entirely matte black, with only a handful of small red LEDs breaking up the design.