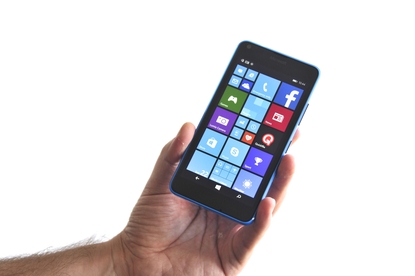 A lot has changed in the ten months that followed the release of the Nokia Lumia 635. A deluge of capable smartphones boasting competitive prices have since launched, and now the low-end of the market is crowded.

Cues have been taken from the acclaimed Lumia 635. The body is still made from polycarbonate plastic and the colours remain vibrant and bright. The back cover is removable, and as far as we can tell, interchangeable.

Taking off the back cover continues to make our stomach cringe. The cover wraps around the sides of the smartphone. It has to be peeled off, pried with fingernails at times, and it feels unnatural because pressure has to be placed not on the case, but the smartphone itself.

Separating the new from the old is its shape. The old trapezoidal shape has been swapped out for one that is rectangular. Corners that taper subtly make the 640 an easy hold.

The greatest difference is the smartphone’s size. It has a bigger footprint, a bigger screen, a larger battery and a higher resolution camera.

The display has grown from 4.5-inches to 5-inches, and the resolution has increased to 1280x720 to support high definition content. The changes have resulted in a higher pixel density than its predecessor at 294 pixels-per-inch.

There’s something special about the Lumia 640’s display and it has to do with the way it presents the time. Old Nokia’s kept the digital clock on the homescreen at all hours. Reading the time could be done with no hands and only a glance.

The Lumia 640 carries on this tradition. It doesn’t affect battery life because the screen’s backlight isn’t on. Aiding this effect is its ClearBlack technology, a set of transparent filters that diffuse pesky reflections.

Screens can make or break a smartphone, and that of the Lumia 640 does enough to make this budget smartphone worthwhile.

Windows Phone has been maturing slowly, but surely. The operating system is comprehensive and it can do everything Apple or Google’s software can. Except, it can’t.

Although Windows Phone has been continuously upgraded, the app ecosystem has been lingering behind. There’s a good chance any app on Apple’s iOS will be available on Google’s Android. That chance is smaller with Windows Phone. Take its portfolio of video on demand services, for instance. There’s Netflix and Quickflix, but no Stan and Presto. Heavy smartphone users will see this selective application support a deal breaker.

Read more: Free upgrade to Windows 10 for computers up to 6 years old

Microsoft has a fix in mind with its upcoming Windows 10. The idea one application can work on all of the devices in an ecosystem is promising. We’ve seen demos of select apps and they were as easy to use on a smartphone as they were on a television. But only time will tell how well Microsoft will execute the ambitious vision.

Processing hardware has scarcely changed. The 1.2GHz quad-core CPU is the same, as is the 8GB of internal storage. RAM has been doubled to 1GB, while the smartphone will take microSD cards 128GBs in size.

Benefitting from a noteworthy upgrade is its removable and replaceable battery. A bigger screen is sure to tax the battery, which is why Microsoft has upped the capacity to 2500 milliamps-hour — an increase of 37 per cent.

Strong battery life was a hallmark of the Lumia 635 and it remains so in the succeeding Lumia 640. We used the smartphone over a week and found battery life often exceeded one day, depending on the intensity of use. Our average was 28 hours, though with light use, it lasted much longer at 38 hours. Results this good are a rarity with smartphones around the 5-inch mark.

Capping off the improvements made to Microsoft’s first smartphone are higher resolution cameras. The introduction of a front camera makes it easier to take ‘selfies’, although they will be one megapixel in size. Skype video calls will be better serviced in high definition.

Read more: What reserving a Windows 10 upgrade means for you

The rear camera is larger at 8 megapixels and works with a single LED flash. Overall camera performance depends on the lighting as the Lumia 640 struggles in complex situations.

Get the lighting right and photos will benefit from vibrant colours, particularly under natural sunlight. Some photos will inspire confidence in the camera’s abilities.

Others won’t on account of image noise in dim lighting, chromatic aberration in some cases or a loss of detail due to limited dynamic contrast.

The camera’s performance then is a reflection of the Lumia 640’s low price.

Microsoft is selling the Lumia 640 outright at $299 — a $20 increase over the Lumia 635. The price is part of the smartphone’s charm, and it gains some more over its close rival, the Motorola Moto G, by ditching a secondary SIM slot in favour of supporting 4G Internet. For people who are always plugged in and torn between the two smartphones, fast internet support makes the Microsoft Lumia 640 the phone of choice.