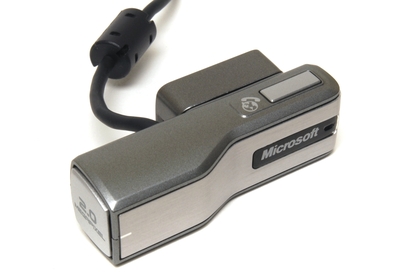 The Microsoft LifeCam NX-6000 is a high quality product that most users will be very satisfied with.

Designed for use with Windows Live Messenger, the LifeCam NX-6000 is a high quality notebook webcam capable of capturing video at high resolutions with impressive image clarity. It has a 2 megapixel camera capable of capturing video at a maximum resolution of 1024x768 and still images at a maximum resolution of 7.6 megapixels. We found it worked exceptionally in well-lit environments but suffered a little in low light.

We tested the camera in two environments using the cameras native resolution of 640x480 pixels. The first was an office with bright fluorescent lights and the second was a home environment with incandescent 100w blubs. In the office environment the image quality was exceptional, with high detail and no problems at all. In fact, it is possibly the best quality image we have seen from a webcam to date. We captured video at this resolution and it worked brilliantly with no lag in frame rate or drop in performance. However, at the maximum supported resolution of 1024x768 the frame rate fell dramatically and became unusable, both for video capture and as an instant messenger camera. The packaging claims that it can capture in High Definition and while 1024x768 is a HD format, it isn't one that this camera excels at.

In the home environment, the image quality wasn't quite as impressive. Since the incandescent lighting is not as bright as the office environment, the camera has some issues. We found some image noise and pixilation as well as periods of frame rate loss. These also extended to low light situations as well. However, since the PC in the office environment was not the same as the home environment, we needed to make sure that the results we were seeing were indicative of the camera and not the PC performance. We therefore used two PCs and one notebook in the home environment under the under the same lighting conditions as the original test. In each instance the same problems were discovered which suggests that the camera was at fault. Regardless, the image quality in this environment is still better than many webcams on the market, so we have no qualms about recommending the LifeCam.

That being said, the integration with Windows Live Messenger seems a little cosmetic and isn't terribly convenient. While you can use this camera with any instant messenger (IM) application, the driver package will not install unless you use Live Messenger on your PC and naturally, it's not Mac compatible. There is a button on the top of the unit that opens a window listing your online Live Messenger contacts. From here you can launch a video conversation but realistically, this seems to be a rather pointless process. It is far easier to start a regular conversation with a contact and then click the button the start a video chat.

As part of the massive 117MB driver package, the LifeCam NX-600 also comes with some preset video effects which, while amusing at first, will rarely be used by most consumers. An installation process that allowed users to choose a bare bones driver installation without any of the extra bells and whistles would have been ideal.

The LifeCam is compatible with Windows Vista. However, we experienced some issues trying to get it to install on the Vista platform. Under Windows XP, the installation was simple and it worked perfectly, but we couldn't get the package to run properly using Vista. It does seem somewhat unlikely that Microsoft would release a webcam that doesn't run properly on their own operating system but, just in case, be sure you keep your receipt if you own a Vista PC.

The design of the LifeCam NX-6000 is simple and elegant. It is small and clips easily onto any notebook display. The camera is spring loaded and can be retracted within the left side of the casing for protection when not in use. It can also be tilted up and down to help with positioning. The integrated microphone sits on the right side of the device and picks up exceptional audio. It is very sensitive, so it picks tends to pick up some ambient noise. If you plan to use the camera in an area of high ambience, you should keep its sensitivity in mind.