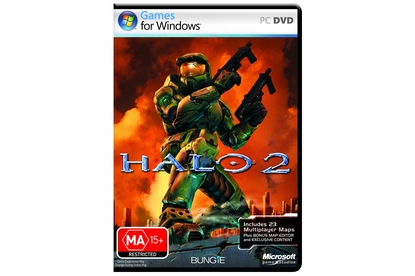 It's Halo 2. Again. If you're a non-Xbox owning Vista user, you'll enjoy it. Everyone else should definitely hold out for Halo 3.

Plenty of eyebrows were raised last year when Microsoft made a surprising announcement: Halo 2 would land on the company's new PC operating system, Windows Vista. One year later, Halo 2 has finally shipped, following a last-minute delay. The good news? It's Halo 2. The bad news? It's Halo 2.

Halo 2 is the creme de la creme of console shooters. Released in late 2004, the game sold an obscene number of copies and single-handedly made the Xbox Live service relevant. Halo and Halo 2 literally made the Xbox, paving the way for Xbox 360.

So it's understandable that Microsoft would look to Halo 2 to pull off some more magic as a launch title for Windows Vista, an operating system dogged by incompatibility complaints and a general lack of consumer interest. The problem is that Halo 2 is nearly three years old, and Halo 3--a game that is superior to its predecessors in every way--is only a few months away from hitting the Xbox 360. But really, the biggest problem with Halo 2 being a Windows Vista exclusive is that it does nothing to warrant being a Vista-only game. Microsoft is clearly trying to leverage the Halo brand as a way to push Windows Vista onto gamers. Will it work? Probably not. Hardcore PC gamers, many of whom have sworn off Vista for its compatibility and performance quirks, aren't going to suddenly hop on the Vista bandwagon because of a three-year-old Xbox game, even if it's Halo 2.

How is the Vista version of Halo 2? It's pretty much what you'd expect: a pixel-for-pixel recreation of the original Xbox version. Aside from two new multiplayer maps and support for high-resolution and anti-aliased graphics modes, Halo 2 on Vista is indistinguishable from the original game. On one hand, that's a plus, but it's also distressing to see that little has been done to improve the overall presentation. Far from being a slick demonstration of Vista, Halo 2 looks more like an older Windows XP title. There is no Direct X 10 support in Halo 2 for Vista, squelching the one possible justification for making Halo 2 Vista-only release.

The good news is that Halo 2 feels tight and responsive on a mouse and keyboard. It's not perfect--the game was clearly designed around a console controller--but PC purists won't be disappointed by the control scheme. Once you find a loadout that works for you, actions such a dual wielding guns and swapping grenade types feels downright natural. Sniping weapons in particular benefit from the new mouse-driven aiming, making headshots a practically effortless affair. We did notice one control quirk: our mouse sensitivity never felt high, even after boosting it to its maximum setting. You can also plug in a wired Xbox 360 controller, something few PC gamers are likely to do, but it's still a nice bonus.

As in the original Xbox version, Halo 2's single-player campaign is a relatively repetitive exercise. Multiplayer is where Halo 2 dominates, and it is here where the PC version will find redemption. Halo 2 servers online are still few and far between, but we expect more servers to go live soon. Even if this Vista version finds enormous popularity, there's no way it will reach the size of the Xbox version -- something multiplayer fiends should consider before investing in this Vista port.

For better or for worse, Halo 2 for Windows Vista is the "ultimate" version of Halo 2, but shares all the flaws and assets of its source material. It's too bad the developers weren't more ambitious and set out to tweak certain well-documented shortcomings in Halo 2, such as the weapon balance. Even a quick facelift in the form of sharper textures and flashier particle effects would've been a godsend. Another downside: you'd better be packing some serious PC hardware, as Halo 2 is a major performance hog. If you don't far surpass the recommended specs, you're in for choppy framerates, especially while online.

In many ways, Halo 2 on Windows Vista mirrors the PC port of the first Halo; its graphics are aged, its performance is erratic, and it adds little to the original game. But in the end, the biggest frustration with Halo 2 lies in Microsoft's decision to make it a Windows Vista exclusive. The game plays well, and its multiplayer component still rings true; so why are hundreds of millions of avid Windows XP gamers left out in the cold? It's hard to recommend a port of an older game that requires an expensive new operating system and a high-end video card, yet adds little new (aside from a map editor) to the formula.