The Blu-ray of the rodent world. 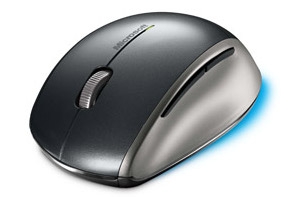 This mouse combines precise tracking technology with a decent design. For the average user the mouse certainly isn’t revolutionary, but it’s a reasonable cost for a decent improvement in precision.

The wireless Explorer Mouse uses a blue optical diode rather than the infrared laser diodes common in most modern mice. BlueTrack is claimed to provide higher sensitivity tracking as well as a greater adaptability to common reflective surfaces such as granite and marble.

The Explorer Mouse certainly isn’t the ugliest Microsoft mouse we’ve come across. (The Wireless Laser Mouse 7000 springs to mind as one of the uglier ones to come out of Redmond.) A three-tone grey colour scheme makes for an attractive look, accompanied by an illuminated underside and BlueTrack logo. The mouse's size is an issue: it possesses a much wider and higher grip than standard units and may take some getting used to. Thankfully, the rubberised plastic material used for the heel of the mouse makes it easy to grip tightly without slipping.

The Explorer Mouse has five buttons. The mouse’s forward and back buttons are situated on the same side, making the forward button an awkward stretch for short fingers. The scroll wheel is easy to use, providing a non-slip continual run that also facilitates four-way scrolling. The grip and button positioning make the Explorer more suited to right-handed use. [A form of sinister discrimination, perhaps — Ed.]

The accompanying USB dongle is quite small and easily fits into a groove on the underside of the mouse for portability. The Explorer Mouse works off two AA batteries, which can be recharged via a bundled docking station. Disappointingly, this dock requires a power plug rather than using a USB port.

The mouse performs admirably under duress as well. We tested the mouse on various surfaces including carpet, grained wood and granite; on all of these surfaces the BlueTrack technology managed to perform without jagged movements or losing its tracking.

As with most Microsoft mice, the accompanying software provides fairly comprehensive button configuration and personalisation for both Windows and Mac OS X. Each button can easily be reassigned to a new function. Mac users have the option of assigning specific functions to individual applications or using the operating system’s integrated mouse configuration instead.