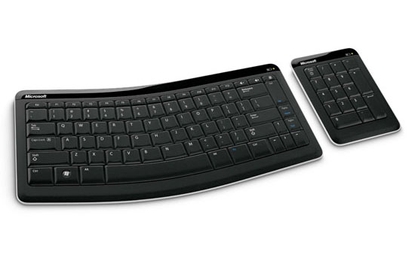 We'd generally consider £44 a reasonably hefty lay-out for a keyboard, but the 6000 is worth it. It's subtly attractive, slim and a pleasure to type on, while the wireless functionality is reliable and useful.

The Microsoft Bluetooth Mobile Keyboard 6000 is an attractive wireless device that justifies its relatively high price tag with comfortable typing and good reliability.

First impressions - and good old-fashioned design stereotypes - might lead you to guess that someone other than Microsoft had come up with the curvy Bluetooth Mobile Keyboard 6000.

For one thing, the 6000 is attractive, in a quiet and minimal manner not generally associated with the bullish software giant. There's a shiny panel along the top but the surround is otherwise matt and rubberised. Underneath the chassis colour switches to a light grey.

For another, the Microsoft Bluetooth Mobile Keyboard 6000 is utterly user-friendly, and works easily out of the box, rapidly hooking up to the Bluetooth connection of our test system. Microsoft claims a wireless range of 10m, and the keyboard proved capable of at least this much in our tests. It continued to type happily long after the typer was too far away to read the writing on the screen - testament to a strong and reliable wireless setup.

The Microsoft Bluetooth Mobile Keyboard 6000's number pad is provided separately, which allows you to reduce still further the space taken up by an already petite product - it looked almost lost in the middle of a newly wire-free desk. It's also wonderfully thin, raised up just 14mm from the desk, and a lightweight 433g, which is ideal for portability if you're pairing the 6000 with a notebook. And unlike many light keyboard units, the 6000 isn't particularly unstable; the rubber feet seem to hold it quite steady enough.

Typing on the 6000 is pleasant; it produces comparatively little sound and the action is quite responsive. The keys feel perhaps a touch cramped, however - we tended to miss the comma key and hit the M instead. Microsoft's Comfort Curve ergonomic design generally helps the keys to sit neatly under the fingers, although the curve is actually gentle and fairly conventional.

A final thing you might not expect, given Microsoft's traditionally fractious relationship with Apple, is that the 6000, with the bare minimum of button configuration, can easily be converted into a Mac keyboard - although bear in mind that you won't have an eject button.