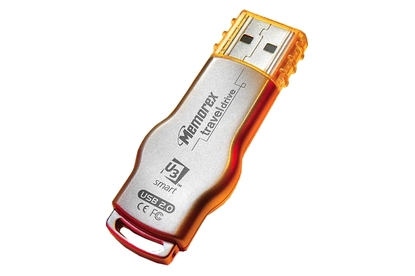 With the steady proliferation of computer access, the U3 TravelDrive is a cheap alternative to getting a notebook.

It's the ultimate convenience for travellers without their own computer - a new USB drive lets you run apps on any PC without leaving your data on the host machine.The applications (which must be U3-compliant) all reside on the portable drive, along with your data and personal settings. This permits you to temporarily turn any Windows 2000 or XP system into a personal workstation without risking your privacy.

We tried out one of the first U3 drives, a 256MB preproduction Memorex TravelDrive that came preloaded with Migo desktop-syncing software, the Mozilla Thunderbird e-mail client, and a U3 version of McAfee VirusScan. When we plugged the drive into an available USB port, two new drive letters appeared in My Computer: one for a standard USB drive, and another, labelled U3 System. This functioned like a virtual CD-ROM, allowing U3 programs to launch automatically like apps on a CD.

A U3 icon appeared in the System Tray, as well. Clicking the icon launched the U3 desktop menu, which looks a bit like the Windows XP Start menu, displaying a list of the available applications in one column and several utilities for exploring and managing the drive in the other. In the lower-left corner, a Download Programs icon links to the U3 Software Central site, where you can browse and download additional software.

When you're done, you click an eject button on the menu to safely remove the device (although, if no apps on the drive are open and you aren't copying any data onto the drive, you should be able to simply unplug it without problems). As promised, the drive left no traces of the applications on our test PC, apart from the device number that any USB drive leaves in the Windows Registry when plugged in.

The use of USB drives for portable applications isn't new. M-Systems XKey drives, for example, let you carry Outlook with you and, when you plug your drive into an Internet-connected PC, synchronise data with a corporate Microsoft Exchange server. But until now, such functionality was based on proprietary technology. U3, which was formed by M-Systems and SanDisk, will license its computing platform to any developer that wants to distribute an application on a U3-compliant drive. At press time, several dozen companies had either released or announced U3 versions of their software, including America Online, ArcSoft, Cerulean Studios (maker of the Trillian universal instant messaging client), McAfee, Nullsoft (developer of the WinAmp digital audio software), and Skype. In addition to M-Systems and SanDisk, several vendors, including Kingston Technology, Memorex, and Verbatim, have announced U3 drives.

"Running applications from the USB drive means, in essence, your entire computer productivity can be handled strictly from the thumb drive itself," says veteran technology consultant Tim Bajarin, who predicts that by the beginning of 2007 more than half of USB drives will ship with bundled software.

U3 CEO, Kate Purmal, says the technology was designed so that it could also be used on other portable storage devices such as CompactFlash or SD cards. She says U3 is negotiating licenses with more than 30 hardware and software vendors: "From the consumers we questioned, the most frequently requested programs they would like to see are secure browsing, e-mail, and financial programs such as Quicken and QuickBooks."