Medion Akoya P7812 (MD 98770) review: A well rounded budget notebook that can be used for a little bit of everything, including gaming 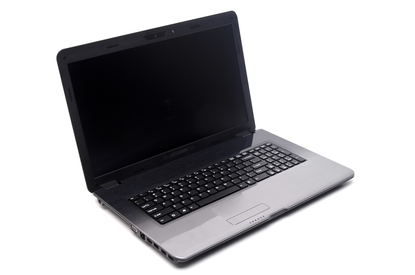 The latest Akoya is a desktop replacement notebook with good versatility. You can use it for office work as well as gaming, and it even has some upgrade potential thanks to a second hard drive bay. We found it comfortable to use and have no problems with it other than the small touchpad and bright status lights. It can be bought from ALDI supermarkets from 26 November.

Medion's Akoya P7812 (MD 98770) is perhaps the most powerful notebook that the company has put out to date. It's a bulky 17.3in desktop replacement that's suitable for home users who want something that can be used for a little bit of everything (even gaming), yet it costs $899. It has a basic design and is a functional computer that has all the features required to tackle daily office and entertainment tasks.

The physical dimensions of the unit are imposing: 420mm wide, 280mm deep and 40mm thick. It weighs 3.3kg, but it doesn't actually feel very heavy for what it is because the weight is spread far and wide. Don't expect too much out of the unit's build quality. It definitely feels like a budget model and it's not overly refined, but unless you drop it or treat it with disrespect, it won't break. That said, it's not a candidate for those of you want mobility; it's just too big to carry on a daily basis. Its 17in size means it should be a stay-at-home desktop replacement computer that commands a permanent spot in a bedroom or home office.

That said, a big battery in the Akoya allows it to be used for a very decent amount of time away from an outlet. In our battery rundown test, in which we disable power management, enable Wi-Fi, maximise brightness and loop an Xvid-encoded video, the Akoya lasted 3hr 11min. The laptop automatically used the integrated Intel HD 3000 graphics of the Core i5 CPU for this test. This makes it possible to unplug the unit and take it in to another room to watch a movie or browse some Web sites.

It's a comfortable notebook to use. The palm rest is more than ample for typing on the chiclet keyboard. The keyboard itself has soft keys that have good responsiveness and we found it to be a joy to type on. The only slight problem is the layout of the arrow keys and number pad, which overlap where the number pad's zero is supposed to be. Still, that's something you can get used to.

With such a large palm rest area (over 100mm deep), we wish that more space could have been dedicated to the Synaptics touchpad — it's a little too small at only 82x40mm and we often found ourselves running out of space while using it. It's a responsive touchpad though and it supports gestures such as two-finger scrolling and three-finger flicking.

You can plug in external peripherals via the unit's four USB ports (one of them is also USB 3.0), and you also get HDMI, Gigabit Ethernet (Atheros AR8151), VGA, and headphone and microphone ports. There is an SD card slot, as well as a webcam, 802.11n Wi-Fi (single band Intel Centrino Wireless-N 1030) and Bluetooth (version 3.0). There are separate F-key combinations assigned to the Wi-Fi and Bluetooth components: Fn-F7 enables or disables the Wi-Fi and Fn-F8 enables or disables the Bluetooth module.

A matte screen is installed on this Akoya and we like it. It doesn't reflect light sources and its resolution of 1600x900 is a little better than the usual 1366x768 resolution that can be found on many other budget laptops. With a 17.3in area, you get a large and clear view of documents and Web pages. Like most laptop screens, it has slightly narrow vertical viewing angles, but is has decent contrast and brightness for viewing photos and movies. There are two speakers installed at the front of the unit and they are good for casual listening. They can fill up a small room with sound, but if you want good low-frequency response, you will have to plug in an external pair of speakers.

The design of this Akoya is simple and clean. It doesn't have any shortcut buttons and its power button resides on the right edge between the cable lock facility and the built-in DVD burner. We like the elegant, gradating pattern on the chassis, which goes from a light grey on the palm rest to a brushed, dark grey near the screen. We're not fans of the status lights that are located in front of the touchpad. They are bright blue and can be annoying. We'd prefer softer, less bright lights in this area.

Under the hood, the Akoya P7812 has an Intel Core i5-2430M CPU, which has a clock speed of 2.4GHz, two cores, plus Hyper-Threading. It's joined by 8GB of DDR3 SDRAM, a 1TB hard drive (there is also room in the chassis to install a second SATA hard drive) and an NVIDIA GeForce GT 555M graphics adapter. This is a configuration that can supply plenty of speed for office applications, but it can also be used for more demanding tasks.

In our Blender 3D rendering test it recorded a time of 43sec, which is what we expected; in our iTunes MP3 encoding test it recorded 55sec, while in our DVD-to-Xvid conversion test it recorded 58min. Its 5400rpm Samsung (HN-M101MBB) hard drive was solid in our tests, recording a file copy rate of 50 megabytes per second. In CrystalDiskMark, it managed a sequential read rate of 93.12MBps and a write rate of 85.78MBps. As you can see, it's a laptop that can definitely be used for tougher tasks such as file conversions and video editing in addition to everyday office work.

This performance is as good as the ASUS K53SC notebook, which has a slightly slower CPU and costs a little less than the Medion. However, the Medion has much better graphics performance. Its NVIDIA GeForce 555GT graphics adapter recorded a score of 10171 in 3DMark06 — more than twice the score of the ASUS notebook — and this shows that it can be used for a little gaming. It's a laptop that's capable of running the latest games, such as Battlefield 3. We ran it at the native resolution of the screen (1600x900) and with medium texture levels. At these settings, the laptop achieved a frame rate of just over 30 per second, which isn't super smooth, but it's enough to allow for decent game play and should suffice unless you are very serious about your gaming.

Because the laptop's base is so big, there is plenty of space for the components and heat is not much of an issue. After playing games on the Medion for a couple of hours, its base did not get hot and the fan on the left side kicked in to extract the warm air generated by the graphics card and the other components. It wasn't overly loud while doing this either.

The Akoya comes pre-installed with the 64-bit version of Windows 7 Home Premium as its main operating system, but Medion has also included a Linux-based quick-boot operating system. This can be accessed by pressing F9 when the laptop is booting. It's basically an environment that you can boot in to in less than 7sec if all you want to do is browse the Web or read your email. It's a nice little extra for those who are interested, but we don't really see the need for it.

As usual, Medion is offering a very good value proposition. The Akoya P7812 (MD 98770) is a desktop replacement-sized laptop with good features and performance for $899 and it will suit students and home users who don't want a regular desktop PC, but rather something that also has portability. There isn't much to dislike about it. Our only quibbles are the small touchpad and the location of the overly bright status lights. It will be available to buy from ALDI stores on 26 November.