Medion ups the ante, offering an Ivy Bridge-based, Core i7 notebook for $899 Medion's latest Akoya laptop will be sold directly by the company and it's a laptop that packs plenty of power at a low price; it can be used for gaming in addition to regular office work and Web browsing. Its hard drive, screen and touchpad could be better, but considering what you get overall for $899, it's hard to complain too much. You'll need to email Medion directly if you want to purchase this unit, but Medion says stocks are strictly limited.

Medion, a company better known for pushing inexpensive laptops through the Aldi supermarket chain, is currently selling a 15.6in, Intel Ivy Bridge-based, Core i7 laptop directly to the public. The company is testing the waters with this laptop, and is keen to find out if a high-performance configuration will sell just as well as its mid-range, mainstream offerings have in the past.

The new laptop, which bears the model name Akoya P6635 (MD 98068), will sell for $899 (plus a shipping cost of $15 Australia wide). It's a steal for a current-generation, quad-core notebook that also has discrete graphics. But here's the thing: there's only a couple of hundred of them to go around. Furthermore, the first 100 units will be sold at a special price of $799 in order to entice people to get in quickly. Medion says that if the interest in this laptop is high, then it will consider bringing more of the same model to market.

The way the Akoya MD 98068 will be sold is far from traditional though: if you want one, you'll need to register your interest directly with Medion by emailing the company. The address you need to contact is: sales@mds.medion.com.au with the subject line "MD98068 Deal". Medion will follow up on all emails to provide details on how to purchase the unit and get it delivered.

Inexpensive feel, but packed with features

We were loaned one of the MD 98068 units for review, and just like many of Medion's previous inexpensive notebooks, this one also represents great value for money. Not only does it bring an Intel Core i7-3610QM CPU to the table, it also includes discrete NVIDIA GeForce GT 630M graphics. What this means is that you can get a reasonably good gaming laptop for under $1000. The rest of the configuration includes 4GB of DDR3 SDRAM (upgradeable via a spare slot), a 750GB hard drive, and a screen that has a native resolution of 1366x768 pixels.

Because it's an inexpensive unit, you shouldn't expect too much from it when it comes to overall user comfort. It's a fairly well built laptop for what it is, but it just doesn't feel as good as more expensive models. Primarily, its screen has narrow vertical viewing angles and could use better contrast. Its Synaptics touchpad, while responsive and accurate, is also very small (80x49mm) and almost blends in with the palm rest. The keyboard is decent overall, but it does have chiclet keys that feel slightly spongy, and a number pad and arrow keys that are squashed to fit. We didn't have much trouble typing on it though and think it's good enough to use if you're a writer.

It's not an overly heavy notebook; it has a weight of 2.5kg, which is currently typical for a 15.6in notebook. The overall look of the notebook is decent and there is nothing gaudy about the design at all. The palm rest and touchpad share the same pattern, but the texture of the pad is slightly different to the palm rest — it needs to be, otherwise you probably wouldn't be able to distinguish the two. There is a glossy trim around the LED-backlit LCD screen, but the bezel and the screen itself are not glossy; the screen has a matte finish that won't reflect light sources.

On the left edge of the Medion, you'll fine two USB 3.0 ports, an HDMI port, VGA and Gigabit Ethernet (from Realtek). The front has an SD card slot, while the right side has a built-in DVD burner, separate microphone and headphone ports, and two USB 2.0 ports. This array of features should suit most users' needs. You also get a built-in webcam, Bluetooth and 802.11n Wi-Fi (via an Intel Centrino Wireless-N 2230 module). The Wi-Fi doesn't support dual-band operation, but it does support Intel WiDi, which can be convenient when you want to watch content from your laptop on your big screen TV (you'll need an adapter such as the Belkin ScreenCast TV to do this).

The speakers in the Akoya are not powerful, but they are fine for up-close listening and YouTube distractions. Capacitive buttons sit just below the speakers and these can be used to change volume, skip and stop or play music, as well as disable the Wi-Fi adapter. They only work well if you put lots of the fleshy part of your finger on them. It's not a necessary feature, but it's nice to have it in such an inexpensive laptop.

The multimedia buttons between the keyboard and the speakers.

As far as performance is concerned, it's a little bit of a mixed bag. The CPU and graphics adapter in the Akoya produced top-notch results, but the hard drive was a little bit of a let-down due to its overall speed. In our Blender 3D rendering test, the Medion put up a time of 19sec, which is a shade quicker than what other laptops with the same CPU have achieved in this test (the ASUS N56VM and HP Pavilion dv6-7030tx, for example, each got 20sec in this test).

In the iTunes MP3 encoding test though, the Medion put up a sluggish 50sec, which is between five and seven seconds slower than we were expecting compared to those two notebooks. We attribute that partly to having only 4GB of RAM, and partly to the 5400rpm hard drive (a Samsung HN-M750MBB model), which recorded only 22.79 megabytes per second (MBps) in our file duplication tests, and which recorded CrystalDiskMark read and write rates of 75.8MBps and 72.83MBps, respectively. The ASUS and HP laptops recorded markedly faster rates in those same tests.

When it comes to encoding media files, the Medion will be accommodating. In our AutoGordianKnot DVD-to-Xvid test, a time of 42min was recorded, which is a decent time in this test, but not as fast as the ASUS and HP laptops. Using Arcsoft Media Converter to turn a DVD file into an MKV file, a time of 11min 30sec was achieved, which is about three minutes off the pace we're used to seeing with laptops that use the same CPU. The Medion would probably do better in these tests if it had 8GB of RAM and a faster hard drive, and both these areas are easily upgradeable once you remove the bottom panel. 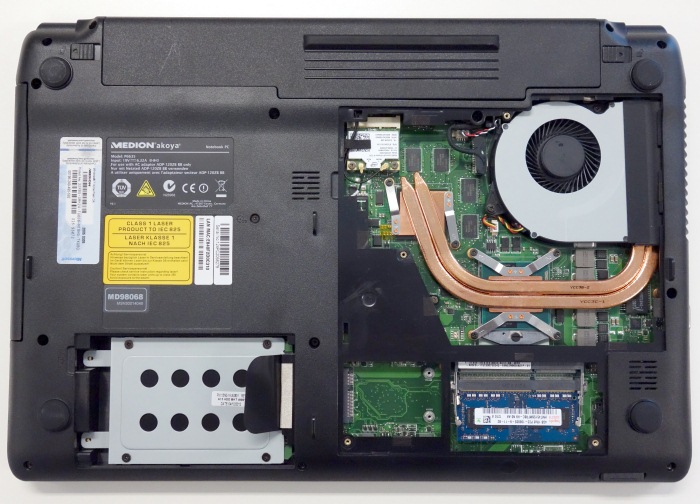 The hard drive and RAM can be easily upgraded, and there is a free mini PCIe slot, too.

The Medion put up a good showing in 3DMark06, with its GeForce GT 630M graphics adapter recording a result of 10772. This is faster than both the ASUS and HP laptops, which also use the same graphics adapter. It also put up a strong showing in Battlefield 3. Running at 1366x768 and with "auto" graphics detail, the Akoya averaged around 30 frames per second (fps), getting as low as 28fps at some points. You can definitely use this laptop for gaming if you wish. There is a large vent on the left side and a fan kicks in to keep the system cool when the graphics and CPU are in heavy use.

A 6-cell battery resides in the base of the unit and it has a 47 Watt-hour rating, which isn't as high as the battery ratings of the ASUS and HP laptops. In our rundown test, in which we disable power management, enable Wi-Fi, maximise screen brightness and loop an Xvid-encoded video, the Akoya lasted 2hr 50min, which is about 40min shorter than ASUS, for example. That said, if you tinker with the power scheme and dim the screen, you can get more out of it. The laptop uses the integrated Intel HD 4000 graphics when it's not plugged in to the wall.

When the performance of the $899 Medion is put up against more expensive laptops with similar configurations, such as the ASUS N56VM ($1399) and HP Pavilion dv6-7030tx ($1699), the only drawback is its disk speed and responsiveness. We noticed that the Medion was sometimes sluggish when launching applications and also when booting (it took 51sec to cold boot). It doesn't have a solid state drive to act as a cache and make the system more responsive, whereas other modern laptops do. There is a Mini PCIe slot available, but Medion doesn't have any data yet on whether a solid state drive can be used as a cache drive (nor did we have a drive to hand for testing at the time of writing).

Update: Medion says the free slot can indeed be used for a solid state drive.

Storage aside, the CPU and graphics departments of this laptop are very strong and actually recorded better results than the comparable ASUS and HP laptops. This doesn't make the Medion better than those laptops just because it's cheaper and faster in those areas — the screen in the HP is Full HD and has better viewing angles, for example, and the ASUS has niceties such as a backlit keyboard and good speakers. It's horses for courses, as the saying goes, and you pay a low price for a laptop that may not be as refined as more expensive models, but it will still be able to do just as good a job when it comes to processing and graphics tasks, and it's backed by a two-year manufacturer's warranty. It's also upgradeable. In short, it's well worth considering, but you'll need to get in quick.