Medion's Akoya E7212 represents great value for anyone who wants a well performing notebook for the home. It's inexpensive and it performs better than many pricier notebooks on the market. It also has a very good set of features. The Akoya E7212 would suit a family looking for a desktop replacement notebook, or a student who wants something zippy and comfortable to work on but doesn't want a PC and can't afford to spend too much. It's available from Aldi while stocks last.

Medion's Akoya E7212 is a large, 17.3in laptop that's inexpensive yet fast and well featured. It's suitable as a desktop replacement notebook for students and families that don't want to fork over more than $800 for a new computer, and it can be used to undertake most tasks — except playing games.

The Akoya E7212 notebook has a 2.3GHz Pentium T4500 CPU that delivers quite a zippy performance, and you won't be left twiddling your thumbs while launching programs and switching between open ones. Media encoding can also be undertaken reasonably quickly and more taxing tasks like photo editing can be tackled as well. The T4500 is a dual-core CPU that has been manufactured using Intel's 45 nanometre technology, which means it's a small chip that won't consume too much electricity and it will remain relatively cool. 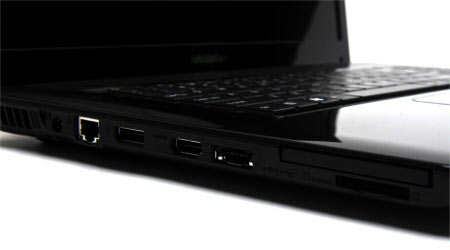 The Akoya E7212 is a large notebook that's primarily designed for desktop use. It has plenty of ports, a built-in optical drive and a comfortable keyboard.

The good performance of the Medion Akoya E7212 was shown in our iTunes MP3 encoding test, in which it took only 1min 16sec to convert 53min worth of WAV files to 192Kbps MP3s, and also in the Blender test, where it took only 1min 16sec to render a 3D image. These times are similar to what the Lenovo ThinkPad T400s achieved with a Core 2 Duo SP9400 CPU running at 2.4GHz — so you can see that the Medion's CPU is no slouch.

During regular usage, we found the Akoya E7212 to be very responsive. We had no problems launching programs and switching between them. We could easily manipulate large photos and view high-definition videos, and compressing files was a breeze. Our WorldBench 6 benchmark suite backed up our real-world experience: it took the Medion only 447sec to complete the Photoshop portion of the test, 462sec to complete the multitasking test and 251sec to complete the WinZip test. This compares favourably with notebooks such as Dell's Inspiron 1545, which has a Core 2 Duo CPU — the Dell was only a few seconds faster in the multitasking test, and the Medion beat it in the Photoshop and WinZip tests.

In addition to the dual-core processor, the good performance of the Medion Akoya E7212 can be attributed to the 4GB of DDR2 SDRAM and the 320GB, 5400rpm hard drive that are installed. What's great about the Akoya E7212 is that you can upgrade its standard configuration at a later date. There is a spare hard drive bay that can be used to install a second 2.5in, Serial ATA-based hard drive. This is something you don't see often in a sub-$1000 notebook, let alone one that costs $799. 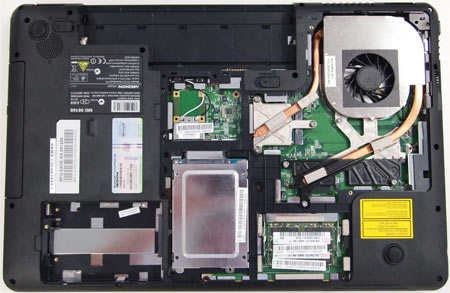 If you take off the access panel, you can see that all the components in the Akoya E7212 are well spaced — and so they should be considering the large size of the notebook (it's base is approximately 42cm wide, 28cm deep and 2.5cm thick). This means that there is plenty of air around them and that the base won't get hot. After many hours of use the base was barely warm and no heat travelled up through the palm rest. The CPU and chipset have a copper heat sink attached to them, which in turn is attached to a fan that extracts warm air through side and rear vents. There are two memory slots (both are occupied) and there is an 802.11n wireless networking module.

The size of the Akoya E7212 and its 3.2kg weight make it too bulky to transport from home to school or the office, and you probably won't want to use it on your lap for a long period of time either. The big size of the notebook has allowed a big battery to be installed, however. It comes with an 8-cell battery that lasted 2hr 42min in our tests. That's a decent result for a notebook with a 17.3in screen and it means you can use the Akoya E7212 on your balcony or in your backyard for quite a while before having to recharge.

Around the edges of the Medion you will find plenty of USB 2.0 ports (four) and two types of monitor port: HDMI and DisplayPort. The latter port is useful if you plan on buying a new very high resolution monitor, but for most of us the HDMI port will do just fine to connect the notebook to a big-screen TV to watch videos. One of the USB 2.0 ports doubles as eSATA port, so you can add fast external storage if you plan to edit videos, for example. You also get a Gigabit Ethernet port, an SD card reader and an ExpressCard/54 slot. There is a built-in DVD burner and there are also line-in, headphone and microphone ports.

The large keyboard and palm rest area make the Akoya E7212 comfortable to type on. The keys are full size and have plenty of travel, which makes them feel good to the touch. They do make a slight rattling sound, but overall the keyboard is solid. The touchpad is the same material as the palm rest and it's a little sticky at times, which means you have to sometimes repeat your action. 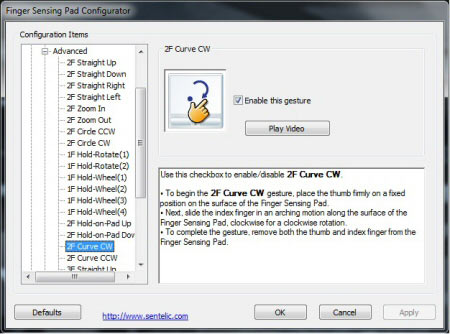 The touchpad has extensive gesture support, though it occasionally wouldn't recognise one during our tests. You can get a list of the gestures by going into the Mouse Properties, clicking on the Finger Sensing Pad tab and then on Advanced.

There aren't any fancy shortcut buttons above the keyboard, though there is plenty of space to include them. You'll have to use the function keys to manipulate the volume level, disable the wireless adapter and adjust the brightness, for example. The lack of extra buttons and shortcut keys means that the laptop looks neat and clean. However, the glossy finish is prone to picking up fingerprints, so you'll need to wipe it every so often. The screen is also glossy and will reflect light.

For $799, you can't go wrong with the Medion Akoya E7212. It performed well in our tests, it's comfortable to use, and it has a good array of features. Coupled with its big 17.3in screen and the ability to install a second hard drive in the future, we think it will make for an excellent desktop replacement for a student or family on a budget. It's available from Aldi from 28 January.