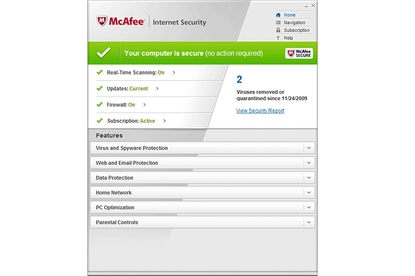 McAfee Internet Security 2011 put up fairly mediocre scores in malware detection tests, though it can be had at a reasonable price.

Bargain hunters: Be patient and you'll often find McAfee on sale at a deep discount: The company's Internet Security 2011 (regularly $74.96 for one year, three PCs as of 12/2/2010) is often available for as little as $50, making it by far the cheapest way to secure the PCs you have at home.

With that said, it put up mediocre scores in overall blocking, detection, and cleanup of malware.

In our tests, McAfee turned in solid numbers in detecting known malware (98.7 percent), but the picture grows dim after that. It stopped just 17 out of 25 real-world attacks, earning it a distant last place in our roundup (the 12th place application in this test stopped 21 attacks). These results mean that it may struggle at blocking new, unknown malware. McAfee also had the worst false positive results in our tests, flagging 10 times as many safe files as malware as some of its competitors. McAfee's 60 percent success rate at scrubbing active malware components from already infected systems placed it behind the pack in that test, too.

McAfee also won little praise in our investigation of scanning speed. In on-demand scans and on-access scans the application scored 9th and 8th place, respectively. But things brightened up quite a bit when we benchmarked our system with McAfee running in the background: All told, McAfee had a minimal impact on PC performance.

Into this confusing and murky picture comes the McAfee interface, which is a little unorthodox but still relatively easy to use. For example, the tool offers no readily apparent way to scan your system manually, but clicking either the "Real-Time Scanning" text or "Virus and Spyware Protection" reveals an option to do so. Cryptically, you'll only find scan options under the former text, although both will also let you create scheduled scans.

Actual settings in McAfee Internet Security are quite slim, and even the devoted tinkerer will find only a few options to configure them, most of which are fine as defaults.

In addition to the usual firewall and spam protectors, McAfee Internet Security includes a number of extras, including parental controls, an online backup tool, hard drive defragmenter, and a secure-delete data scrubber. That said, we aren't totally sold on the QuickClean PC optimization tool that's installed by default, what with its claims to "erase unnecessary files, such as old ActiveX programs." Are most users worried about their hard drives being clogged by mountains of ActiveX programs? Is anyone?

McAfee's solid performance at detecting common, known malware is enough to merit some consideration, but its dismal real-world malware blocking and over-the-top problem with false positives are enough to give us serious pause, no matter how great the deal is.