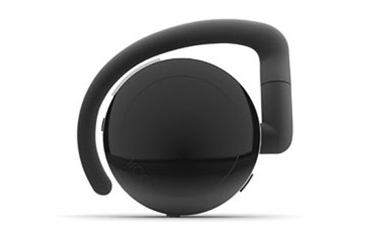 Departing from the typical design, the Nica sits comfortably outside your ear. It's a pity, though, that the headset's call quality regularly falls below average.

The Nica by Maverick Lifestyle has one design aspect in common with the Callpod Dragon V2: Both Bluetooth headsets sport earpieces that look like large buttons. Unlike the Callpod, though, the Nica lacks an earbud portion, so the circular headset sits outside your ear--not wedged in it. In the package, the company includes a slick desk dock/charger, which you plug into a power outlet. Since the headset attaches magnetically to the top of the dock/charger, you don't need to plug a cable into the headset for charging purposes--a nice touch. (For $39, you can opt for the car dock; likewise, the headset attaches magnetically to the car charger.)

The Nica's movable arm lets you attach the headset to your ear. With the black headset I tested (the product also comes in white and pink), despite a considerable amount of fiddling, I was not able to arrive at a supersnug fit on my small ear--the Nica tended to move away if I turned my head. Even though it felt as if I were wearing a coat-button-size clip-on earring, the headset was still reasonably light, and I liked not having a mic resting on my cheek. A couple of other testers with larger ears tried the Nica on for size; for them, the fit was comfy and the headset stayed in place. They both agreed that the unit felt lightweight, too.

All of the controls are embedded around the Nica's circumference. I liked the dedicated (though small) power on/off switch; but with the headset on my ear, I found that I needed to steady the headset with one hand while switching it on or off with the other. The main call button was easy to find, but I perceived a little lag time in its response--it wasn't as snappy a motion as I would have liked. The volume controls, on the underside of the headset, were tricky to locate by feel at first, and it seemed easier to operate them with my nails instead of with the pads of my fingers.

Roughly half of the time, call quality was not up to snuff. For starters, incoming voices often sounded spotty and far away. Parties at the other end of the line complained that my voice came across choppy and muffled. Some calls sounded as if they were coming from inside a dryer, giving off a distracting churning or wavy sound effect. Other times, my conversations sounded clear with no words getting garbled; those calls were acceptable. The Nica did a so-so job of cancelling out background music: If I stopped talking, my callers could hear something indistinct in the background, but when I started yakking again the headset picked up less of the noise.

During range tests, my (often crackly) calls on the Nica dropped several feet shy of the 30-foot limit. (Typically, during my range tests for Bluetooth headset products, one or both parties hear some crackling as I approach the edge of the range; but once I veer back toward the phone, the crackling disappears, the calls stay connected, and we can resume normal conversation.)

As for specifications, I was surprised to see that the Nica is a generation behind: It supports Bluetooth version 1.2. As of this writing, new headsets tend to support version 2.1. (The latest Bluetooth release is version 3.0, but products supporting the newest spec are not expected to appear on the market until later this year or early 2010.)

Ultimately, $130 is a lot to pay for a headset that doesn't consistently deliver the goods--at best, its call quality is fair to middling. You may be attracted to the Maverick Nica because it doesn't require you to stick a bud in your ear, but I'd suggest passing it up. Give earbuds a chance, and check out our current crop of high-ranking Bluetooth headsets instead.