From analog to digital 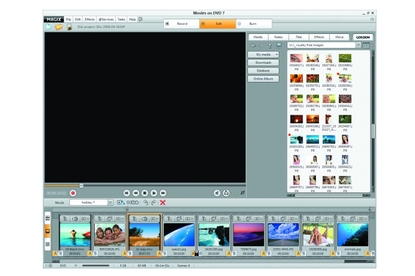 Rescue Your Videotapes! aims to provide everything you need to transfer your VHS, Betamax or Hi8 collection to DVD. The software’s good, the hardware’s good, but the package could do with better integration of the two. It’s fiddly to get going, but once things are running smoothly, there are enough automated editing and DVD front-end functions to make a professional conversions easy and quick.

If you have a large collection of legacy video tapes, the Magix Rescue Your Videotapes kit is an excellent way to transfer them to DVD.

Rescue Your Videotapes! combines hardware and software intelligently, and the Magix box contains a full copy of Movies on DVD 7, Magix's software which handles video capture, editing and DVD burning.

The hardware comprises an analog-to-digital video capture device, which connects into a USB socket where it derives its power. A Scart-to-composite video cable is included, which plugs into a VHS video tape recorder. There's even a USB extension lead, so there's no need to fiddle round the back of the PC.

Connecting up the hardware is easy enough, but installing the software isn't as straightforward as it could be. It's a shame installing Movies on DVD 7 doesn't install the capture device driver, too — this is a separate operation. When you start to record a video, it's quite likely nothing will appear on the preview screen, as the USB device is not made default if you already have a video card with a composite input — as many do.

These initial teething troubles quickly fade, though, once you start using the program properly. All kinds of material can be captured: from VHS or even Betamax tapes, from a camcorder, or from recordings made on a PVR with a hard drive. Video can be captured from 160x120 resolution at 12.5fps for web use, up to 720x576 ('DVD quality').

Once in place, although there isn't the same depth of editing function found in Pinnacle Studio or Adobe Premiere Elements, there's scope to customise your video. There's automatic scene detection, which works well, and ad detection, to remove unwanted advert breaks. This sometimes needs some manual trimming to tidy up the joins. You can also add titles and use the pre-defined, DVD front-end menus to present content in an easy-to use way before burning to disc.

Much of the editing work is automated and can be done with a few clicks, so if there's a lot of material to transfer, you don't have to fiddle around repeating many, intricate manipulations on each set of clips or programmes.