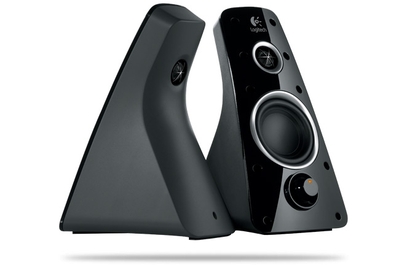 If you’re looking for a simple and compact pair of stereo speakers that still sound detailed, the Z520 set from Logitech is a good choice. It doesn’t have everything we’d want in a set of near-field speakers but the overall package is tempting.

Logitech's Z520 stereo PC speakers are relatively expensive. The sound they produce is worth the outlay, though; good treble and mid-range response make for accurate and lively musical reproduction. The lack of a subwoofer means the system is suited to PC users looking for a compact, refined system rather than a bass-heavy one.

We’ve generally been fans of Logitech’s previous PC speaker line-ups. In the past the company has offered the Z-5, the Z-Cinema and the Z-5500 at reasonable prices.

The Logitech Z520 speakers are reasonably well built, with a conservative design that still possesses a few stylish cues. Detatching the grills will show off the silver accents and piano-black fascia, but we prefer the grills on for a minimalist look. The right speaker has a combination power button and volume control with a dim orange light burning when the speakers are turned on.

A wall-wart power brick connects to the right speaker with a few metres of cord, while the speakers themselves can be separated by around two metres. The 3.5mm audio jack is a similar length, so if your PC is a short distance away from your monitor you won’t be inconvenienced. We would have liked the addition of an inbuilt DAC (sound card) and the ability to connect via USB, like the older and cheaper Logitech Z5 speakers. The right speaker has line-in and line-out ports on its side for auxiliary and headphone connections.

The sound quality from the Logitech Z520 PC speakers is good for their price point. A single 1in tweeter and a 3in woofer on the front of each speaker are joined by another tweeter on the rear, which provides some omnidirectional acoustics. We tested the Z520 with a whole range of audio you’d expect to hear on a desktop PC — streaming Internet radio, YouTube, MP3s, CDs, movies and PC games. We found the system best suited to CDs and other music, with balanced and accurate treble and mid-range at medium to high volumes. There’s no lower bass extension because the system does not include a subwoofer. This makes the speakers sometimes sound flat when watching movies and playing action PC games. The Z523 includes a subwoofer and costs less, but the Z520’s saving graces are its clarity and good treble balance, thanks to discrete tweeters.

Logitech’s Z520 speaker system is a good compact speaker system for those who want clear, high-quality PC audio for a reasonable price but don’t have the space to store a bulky subwoofer.