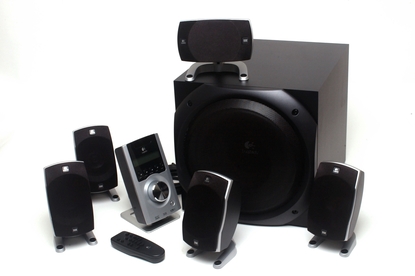 If you need a great set of PC speakers for movies and games, then the Z5500s should be a prime candidate. For music lovers they may not be the first choice, but their strong performance all around means they cannot be ignored.

As well as dominating the computer peripherals market, Logitech are one of the premiere manufacturers of PC speakers. The Z5500 is their flagship model, offering full 5.1 surround sound for your PC. Don't be mistaken however, this unit can be connected to a DVD player, iPod or virtually any other kind of input, and fulfils the basic functions of a proper home theatre system.

Being a 5.1 system, the Z5500 comes with a full five surround speakers plus an enormous subwoofer and a small receiver. We thought the unit looked very sophisticated. Rather than a side on, home entertainment unit, the receiver is a vertical control system, suitable for a PC setup. It has a small, monochrome LED which displays all the system information and is more than sufficient for such a system. The subwoofer on the other hand is a gigantic cube balancing this nicely. It is larger than most home theatre subs however, so you'll need to take that into account if working in a space constrained environment. As we stated, this system can easily be used as a home theatre setup, however the speakers themselves may not fit well with a lounge room motif. Logitech have gone some way to remedying this, offering dark speaker netting with the package, but we still thought they ultimately looked a little out of place.

Of course the setup is primarily made to be a computer unit, and it succeeds in that regard with flying colours. We found the sound to be absolutely perfect for a gaming and movie PC. Something many companies fail to understand is that when you're gaming, you want one thing: bass! When you're crouched in a trench with shells falling all around you, bass makes the difference between feeling like being pelted with pea shooters and fighting for your life. When your sound has impact you really become immersed in the game. The Z5500s exemplify this perfectly. The default bass level is absolutely crunching; the most prominent element of the sound by far. It doesn't drown out the other elements, but is rather pushed to the front. The result? Cracking gun shots and ridiculously powerful explosions.

Whilst this sound was absolutely fantastic for games and movies, we found it a little lacking for music. The heavy bass levels really coloured the sound in pretty much everything we tried. Turning down the bass helped, but it was really a case of all or nothing. When songs by Ben Folds and Tori Amos start to sound bass heavy you know there's a problem. Still the quality of the sound with the bass lowered was above average, with great presentation of the mid range and highs that perhaps just verge on being harsh. If you're happy fiddling with the system between sessions then it will still perform quite well for music.

The highlight of the system was definitely the surround sound. On a par with the majority of more expensive 5.1 home theatre systems, the beautiful three dimensional presentation of sound on the Z5500s was exquisite. Planes zoomed in from off screen, transitioning perfectly across the individual speakers, and there was great separation of each sound. This was particularly noticeable with our music, even in stereo mode the front three speakers really brought out a lot of definition in the songs. Overall the Z5500's performed fantastically in our sound tests.

Its performance in the home theatre arena was similarly impressive. It sports a nice range of surround modes including DTS 5.1, Dolby Digital and both Prologic I and II, which is a robust offering for a set of PC speakers. There are also options to alter bass, treble and surround volumes, which allow you to tweak the sound to your tastes and make up for some of the system's short fallings.

The receiver has a few connection options, including a split stereo cable and both optical and co-axial ports. There are obviously no video connections as this is purely an audio setup, but at this price it is more than worth the money.