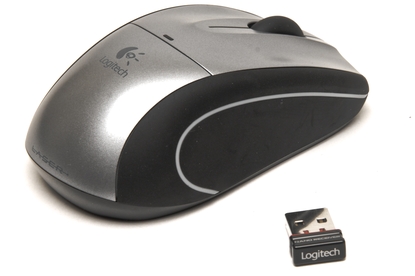 The V450 Nano is ideal if you are after a basic notebook mouse and its long battery life makes it especially appealing for frequent travellers.

Designed specifically for notebooks, the V450 Nano boasts laser precision for smooth curser control and an ergonomic design with rubber side grips. Best of all, this compact mouse has a USB receiver barely larger than a coin.

Aesthetically, the V450 Nano is largely unremarkable but it’s a comfortable mouse to use. The rubber side grips are a welcome inclusion, while the curves and general design of this mouse make it effortless to grip. It is a little heavy with batteries installed, but this isn’t really an issue during general use.

The mouse requires two AA batteries, which are included in the package. The batteries aren’t rechargeable, but Logitech claims a 12-month battery life if you switch the mouse off when you aren't using it. We had no way of testing this claim; for frequent users a set of rechargeable alkaline batteries would probably be a wise investment.

A neat feature of the V450 is its receiver. About the size of a 10 cent coin, the Nano receiver has been designed to plug into your notebook permanently so the mouse can always be ready to use. Its size makes it ideal for regular travellers. Conveniently, you can also store the receiver in a small compartment inside the mouse itself — a handy feature considering its size and the fact that it could easily be lost. However, most notebooks come with Bluetooth connectivity, so a wireless Bluetooth mouse may be more appealing because you won't need to plug in a receiver.

Although Logitech includes a CD in the sales package, there is no need for software to be installed as this is a plug and play device. Once you plug in the USB receiver and turn on the mouse you are up and running in a matter of seconds. The included SetPoint software does allow customisation of the buttons and the scroll wheel, though.