Logitech UE Air Speaker review: The UE Air is a commendable speaker system with decent sound quality, but it will disappoint those looking for fantastic audio. If you own an iOS device and you're looking for a simple and easy solution to play your music in the home, you should definitely consider the Logitech UE Air Speaker. However, given its high price tag, the UE Air Speaker's audio quality is a little disappointing. This is certainly not a bad speaker system, but merely a good one that's a little overpriced.

Logitech's UE Air Speaker uses Apple's wireless AirPlay technology to play streamed music from a compatible iOS device. The UE Air is a large, but good looking speaker system that's ridiculously easy to set up and use, but its sound quality is a little disappointing considering its price tag.

The Logitech UE Air Speaker makes a good first impression. It's a rather large product, measuring over 500mm wide and almost 170mm high, so do keep in mind that you'll need a bit of space to store it. The UE Air is light and is therefore easy to move around should you wish to utilise it in multiple areas of your home. Its minimalist, all-black design is both attractive and functional.

The fit and finish of the Logitech UE Air is reasonably impressive, but not perfect. We like the gloss black plastic on the top, despite it being a real fingerprint magnet, and the hideaway iOS dock cradle that houses an iPhone, iPad or iPod touch is a nice touch. However, the dock does wiggle from side to side when opened if pressure is applied, which is disappointing given the unit's $500 price tag.

The Logitech UE Air Speaker is one of the simplest products to set up and use that we've ever tested. On top of the glossy piano black unit are three metal controls — a large volume dial with a small dimple for your fingertip in sits in the middle, flanked by a mute button on the left and a power button on the right. A hidden LED to the right of the power button glows green when the unit is on, flashes green in sleep mode and flashes orange when there is a network or firmware issue. Another hidden LED on the front of the dock cradle denotes the same, though this can be hard to see unless you have positioned the UE Air Speaker at head height or above. Our only complaint with the controls is the fact there is no visual volume indicator and the volume dial itself feels a little loose.

The Logitech UE Air Speaker takes about 35 seconds to start up, which is a little slow. However, once you've turned it on, setting up an AirPlay connection is as simple as ever. Simply slide out the cradle and dock your iOS device (connected to your Wi-Fi network) where you will be prompted to install the UE Air app. Then simply enter the Wi-Fi password when prompted and the UE Air speaker will connect with your phone. In addition, you can set up the UE Air to play music from your computer through iTunes by going through a configuration process that takes less than a few minutes. 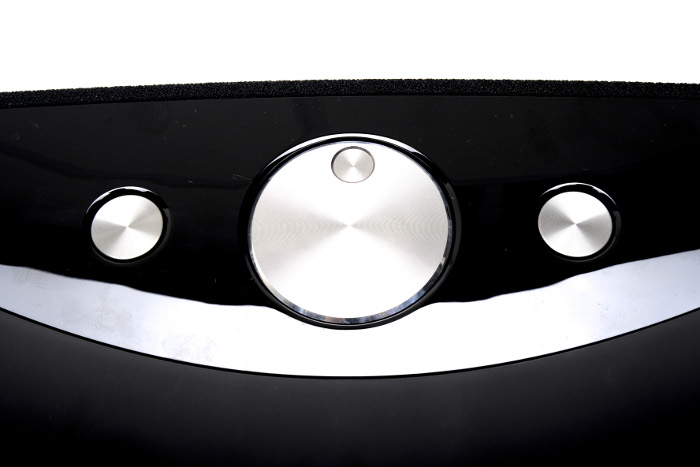 Next page: Sound quality and more