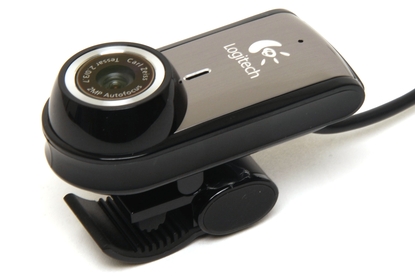 The Logitech QuickCam Pro for Notebooks is an excellent webcam which can produce high quality images in well lit environments. Unfortunately, like most webcams, its image quality suffers when the lighting is not optimal.

The Logitech QuickCam Pro for Notebooks is a mid- to high-end webcam with a 2Mp sensor and an integrated microphone. It captures excellent image quality in well lit areas and average images in dimly lit environments.

We tested the camera in various environments including a well lit office environment, outdoors, and a dimly lit home environment. On the whole, we were impressed with the results. The camera uses a proprietary technology called RightLight 2 which automatically adjusts the image according to the lighting situation. Images in the well lit environment looked crisp and clear but we found that when using RightLight 2, there tended to be some light blooming around the subject adding a slightly ethereal look. In the outdoor environment, we had no major problems with the image quality. The image was crisp with a high level of detail and no visual artefacts. However, in the dimly lit environment there was some noise in the image, even with the RightLight 2 technology in effect. The image wasn't unusable, it just wasn't particularly brilliant. It was on-par with most webcams we have reviewed and once an additional light source was added to the room, it was no longer a problem. If you are planning to use this camera in a dim environment, we would recommend you use a desk lamp with a low watt bulb (preferably a 40W daylight balanced bulb) to add illumination to the subject being captured.

The integrated microphone was able to pick up voice with clarity and could cancel a good amount of excess noise. However, in our home environment, which has a PC with a beefy graphics card fan, the fan noise could still be heard. Another proprietary technology used in this camera is RightSound. When employed, it attempts to clean the audio and remove any echo or background noise. It does a good job of it too, but it is still not perfect. However, in the office environment it was exceptional, as a great deal of background chatter was eliminated.

Setting up the QuickCam Pro is very simple. An installation CD is provided with the unit which, once installed, is all you need to do. The installation includes the QuickCam software which is an easy to use interface allowing you to tweak the image quality. In addition, there is also added functionality for video chat users which is compatible with a number of popular instant messaging applications such as Windows Live Messenger, Skype and Yahoo Messenger. These include a "do not disturb" shutter which replaces your image with an image of your choice and a number of image filters and silly add-ons like moustaches and whatnot which overlay on your face.

The software also allows for face tracking which attempts to keep your face in the centre of the frame at all times. While it worked reasonably well, it too, was not perfect and even when working well, we found it to be more distracting than it was useful.

The package comes with a carry case and a 12in desktop stand. The clip on the camera can be used with notebook panels up to 20mm thick and includes simple vertical tilt functionality.