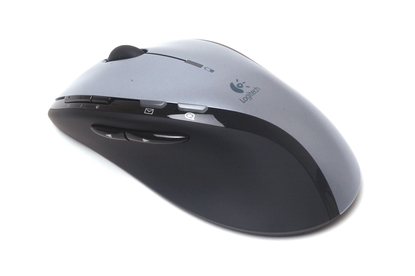 A reasonable mouse that brings new technology to the table but ultimately winds up failing to impress.

Logitech's MX610 is the desktop equivalent of the G5. It is billed as the world's first "smart mouse", attributed to the small microprocessor housed inside that is capable of relaying information in a two-way stream, instead of merely outputting data to the USB or PS2 port. We loved the concept; an input device with the ability to perform functions on its own, but soon found the implementation on this particular device is nothing but a gimmick.

The main function of the processor is to operate the two new buttons on the mouse. When a new email or instant message arrives, the corresponding button lights up, and pressing it will open the item. Whilst this may sound pretty cool, there were a couple of problems that really made it a less than desirable feature. Most importantly the buttons were very difficult to reach. There are plenty of places that the thumb or fingers naturally fall, which would have made very suitable locations for these, but Logitech bizarrely chose to place them under the first finger, which requires a complete reshuffle of the hand to access. We were also disappointed to discover the email alert only operates with outlook express. We use Lotus Notes in the office, as well as MSN (and corresponding email accounts) and so this function was largely useless to us.

Finally, whilst the feature is nifty, it isn't really something you buy a mouse for. Most of the time an MSN or email alert flashes on the screen, or opens itself automatically. There was never a situation when using the mouse that we noticed the light before we knew we had a message. It could have application in gaming situations, but then we'd recommend the Logitech G5 instead.

Apart from the poor placement of the two new buttons we had no complaints about the design of the mouse. It follows the sleek, curved design of previous Logitech mice, with a smooth rivet on the left hand side to accommodate the thumb. This makes it that little bit more comfortable to grip, but also prohibits left-handers from using the mouse with any degree of accuracy.

As has become standard, the MX610 has two buttons along the thumb rivet, which default as back and forward buttons for internet navigation, but they can be rebound as you see fit. The other addition that takes advantage of the smart mouse technology is three new media buttons, which are in a much more accessible place in line with the scroll wheel. They allow you to control volume or mute sound completely, and are much more practical than the notification buttons.

The MX610 is a wireless, laser mouse, the successor to Logitech's desktop MX1000. The big selling point of new mouse technology is that it can be used on any surface with ever increasing accuracy. Unfortunately we found the MX610 came up lacking in this department. It was more accurate than our standard office optical mouse, but compared to the precision devices we've used recently (the MX1000, the G5) it simply felt outclassed. We found the movement a little sluggish, and were annoyed at the power-up time when the mouse had been left for a while. Wireless mice typically switch off if left idle for a time to conserve power, but it can sometimes take more than two seconds for the mouse to start responding, which feels like an eternity compared to a corded mouse.

We also disliked the use of AA batteries, which require constant replacing. The MX1000. utilises a rechargeable lithium ion battery, with a charging cradle, and we found this to be an infinitely more practical solution.