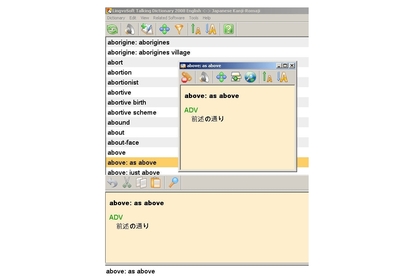 The LingvoSoft Traveller's Suite 2008 English <-> Japanese Kanji Romaji for Windows is a comprehensive travel companion for your pocket PC. While its name might be a bit of a mouthful, it should ensure you never get tongue-tied again.

In years gone by, Australian overseas travellers typically employed two 'skills' when attempting to converse with the native population. The first and most popular method involved making wild gesticulations while talking like a lobotomised zombie ("do YOU... know WHERE... the TOILET ...is?"), whereas the second involved leafing fruitlessly through a dog-eared foreign phrase book and mumbling an occasional string of gibberish. Naturally, neither method was particularly successful, and has probably done more to perpetuate the 'stupid Aussie' stereotype than a thousand Paul Hogan movies.

Thankfully, we now have Lingvosoft's Traveller's Language Suites to help us avoid these bilingual entanglements. These handy applications have been specifically designed for use with PDAs and Pocket PCs, making them ideal for roaming backpacker types. Each suite combines a variety of learning tools from Lingvosoft's range of linguistic software, including a phrase book, travelling guide and a talking dictionary. This makes the Traveller's Suite suitable for a wide variety of users; from globe-trotting tourists to stay-at-home hobbyists who want to learn a new language. We looked at the 2008 English Japanese Kanji Romaji version in an attempt to put the interface through its paces.

According to LingvoSoft, this latest suite for Japanese Kanji Romajii includes over 400,000 unique words and phrases; which should see you through most conceivable situations -- there's even a slightly dodgy "how much per hour?" question. The first tool we checked out was the ever-handy Talking PhraseBook. Upon first launching the application, an assortment of colourful icons fill the screen; each representing a different topic, such as shopping, transport, banks and police. Topics are then further broken down into separate categories, which can be viewed in either Phrases or Learning mode.

For example, if you wanted to request a bus schedule, you would do so by selecting the Travelling topic, choosing the Train/Bus category and scrolling down the available list of phrases. Handily, specific words can be swapped around to create a specific phrase (i.e. -- a country name, type of food or number). Once you have made your selection, the software will display a written translation in either Kanji (Chinese characters) or Romajii (Latin/English characters). As the name of the tool implies, you also receive a spoken translation. We tried this out on a Japanese-speaking friend of ours who claimed the PhraseBook had impeccable enunciation. Unfortunately, none of us speak Japanese so we'll have to take his word for it.

In any event, the software is infinitely more useful than traditional phrase books, which offer no phonetic translation at all. Our only gripe concerns the limited number of swappable phrases, which are far from all-encompassing (for instance, while it's possible to request your bag be flown to a variety of international cities, many locations -- such as Melbourne -- fail to make the cut). Presumably this will be remedied with additional software updates, but it nevertheless remains something to be wary of.

Next up, we looked at the Talking Dictionary application. As with the phrase book, it features text-to-speech capabilities and covers both words and their meaning; however, due to the huge range of words involved, an automated robotic voice takes care of the translations. Naturally, the software allows users to type words directly into the window, or search about in the traditional way. A simplified Picture Dictionary -- which displays photographs and illustrations alongside words -- has also been included in the software package. It looks kind of cool, but we're not altogether sure what the point is (perhaps it's aimed at ambitious illiterates who want to learn two languages at once).

All up, this is a very handy product that should immeasurably improve your stay in the Land of the Rising Sun. When you consider that most language-learning audio CDs cost around the same price, the LingvoSoft Traveller's Suite represents good value for money (be it dollars or yen).